Posted by Phil Newsome on July 27, 2019
The President of the Republic of the Philippines, President Rodrigo Roa Duterte has terminated the franchises and licenses of all gaming or gambling schemes granted by the Philippine Charity Sweepstakes Office (PCSO) pending investigation for massive corruption. 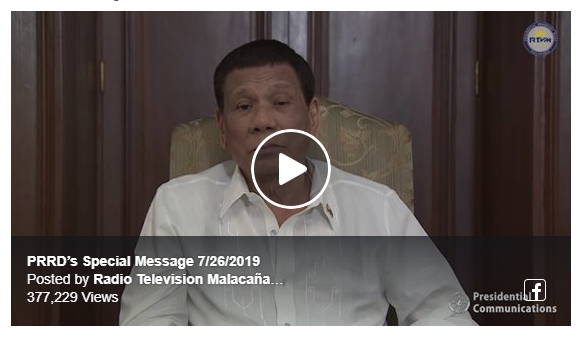 Pres. Duterte also ordered the arrest of those involved if they will operate starting Saturday. The message of the Chief Executive was made through the Presidential Communications and Radio TV Malacanang (RTVM).

The decision of the President was made because he stated that he cannot allow corruption to thrive in the country.

"I have today ordered the closure, the stoppage of all gaming schemes sa… whatever nature, however done, that got the franchises to do from the PCSO. The ground is massive corruption," he said.

"Pending investigation, lahat ho ng laro ng Lotto, STL, Peryahan ng Bayan, or whatever nature, there’s one that yung gambling machine, Keno, I said all gaming activities. Yung gambling, that got the franchise from government through PCSO, are, as of today, suspended or terminated because of massive corruption," he added.

The President of the Republic then ordered the Philippine National Police (PNP) chief General Oscar Albayalde and the military to make sure that the said numbers games will stop from operating beginning Saturday and to arrest those who will violate.

“I am ordering the PNP, PNP Chief Albayalde, to arrest anybody, and goes also for the military, to arrest people engaged in gambling activities in connection with the franchises, licenses, concessions granted by the PCSO,” he said.

“I will give them 24 hours to remove them from the public places. Tomorrow, beginning tomorrow at sunrise, everything, all transactions and gaming, wager of bets, becomes illegal,” he added.

“The order is grounded on the preservation of the resources of the nation,” he continued.

The former Mayor of Davao City also said that he will not honor any court order that will stop the government from investigating the corruption allegations in the PCSO.