Posted by Phil Newsome on March 23, 2018
Veteran journalist and prominent TV host who is now the head of the Presidential Communications Operations Office, Secretary Martin Andanar ordered an investigation into what he claimed was a "breach of protocol" in the supposed grammatical errors on IDs issued to the media that became the subject of mockery and criticisms. 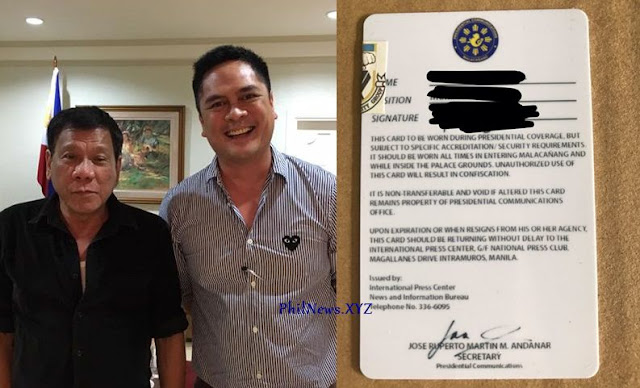 The controversial instructions that could be found at the back side of the PCOO ID given to the members of the MPC and international press was criticized not only by the mainstream media but also on mainstream media critical to the President.

Secretary Andanar already directed the recall of the controversial IDs filled with grammatical errors, which critics and grammarians picked on notablly due to the following "instructions" printed on the cards.

Here's the Controversial Instructions in the PCOO ID issued to journalists:

“This card to be worn during presidential coverage, but subject to specific accreditation/security requirements. It should be  worn all times in entering Malacañang and while inside the Palace grounds. Unauthorized use of this card will result in confiscation.

“It is non-transferable and void if altered this card remains property of the Presidential Communications Office.

“Upon expiration or when resigns from his or her agency, this card should be returning without delay to the International Press Center, G/F National Press Club, Magallanes Drive, Intramuros, Manila.”

The controversial ID made headlines when a number of mainstream media allegedly sensationalized the issue. The Presidential Communications Operations Office (PCOO) usually provides identification cards or IDs to members of the Malacañang Press Corps (MPC) and Foreign Correspondents Association of the Philippines (FOCAP) covering the President.

According to Secretary Andanar's explanation released to some media entities, his staff did no show the backflip of the ID which features the controversial instructions.

In a text message sent to the Inquirer, Sec. Andanar explained that there are four grounds on the controversial ID.

“1. Staff did not show the backflip of the ID to me; 2. IPC did not return the final design for my approval; 3. IPC used an e-signature without my permission; 4. IPC used the wrong e-signature.”

This is not the first time that the Office of Secretary Martin Andanar made some controversial gaffe because the PCOO was already criticized earlier for their failures to proofread their articles the using of wrong photos for the Philippine News Agency website.

During previous interviews, Sec. Andanar explained that there might be some people sabotaging the news agency of the government because most of the journalists and writers of the PNA were veteran journalists and there's no way they commit some simple mistakes.

Secretary Andanar joined the Presidential Communications Operations Office (PCOO) during the administration of Pres. Rody Duterte but most of the employees of the PCOO were already working during the previous administrations.