Posted by Phil Newsome on March 22, 2018
Popular social media personality who has more than a million followers on Facebook, Thinking Pinoy or RJ Nieto in real life revealed on his latest post on Facebook that Mayor Sara Duterte denied reports that reelectionist Sen. Bam Aquino expressed their intentions of  joining her political party Hugpong sa Pagbabago. 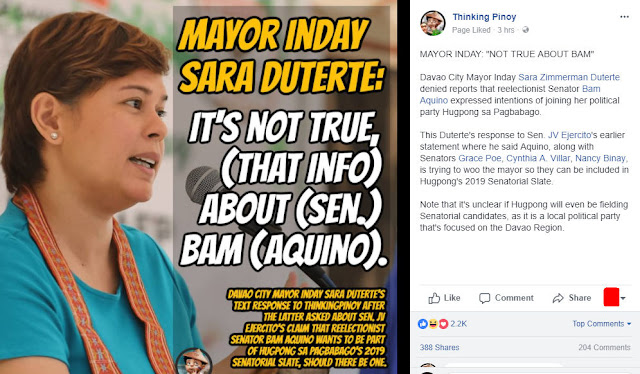 Sen. Bam Aquino is a known political figure who is considered as one of the most vocal critic of Pres. Duterte, was reportedly running for Senator under the banner of the group headed by Davao City Mayor Inday Sara Duterte.

MAYOR INDAY: "NOT TRUE ABOUT BAM"

This Duterte's response to Sen. JV Ejercito's earlier statement where he said Aquino, along with Senators Grace Poe, Cynthia A. Villar, Nancy Binay, is trying to woo the mayor so they can be included in Hugpong's 2019 Senatorial Slate.

Note that it's unclear if Hugpong will even be fielding Senatorial candidates, as it is a local political party that's focused on the Davao Region.