Posted by Phil Newsome on March 23, 2018
The local fan page of Marvel Cinematic Universe in the Philippines as well as various Pro-Duterte Facebook Pages exposed the biases of the mainstream media in the Philippines who spreads fake news about the reasons why Hayley Atwell will no longer visit the country for the Comic Con event this weekend. 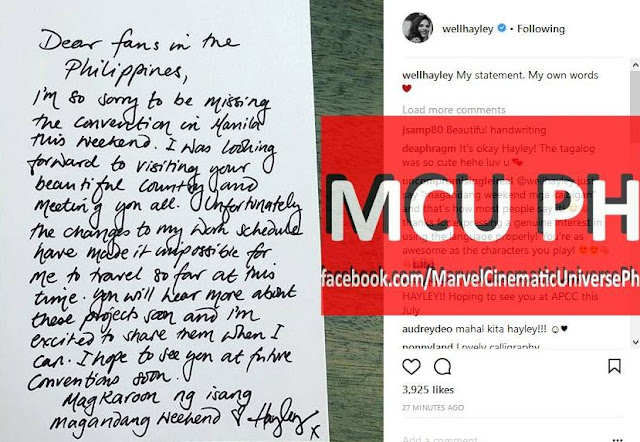 According to Marvel Cinematic Universe, the popular Agent Carter star Hayley Atwell will not visit the Philippines for some reasons on her schedule while VOVPh, one of the most popular political FB Page in the country, revealed that the main reasons why Atwell cancelled her Philippine visit was due to schedules and not political,unrest which was reported by the mainstream media.

The Hollywood actress known for her role as Peggy Carter in Agent Carter in the Marvel Cinematic Universe, was reportedly not available for the said event as various mainstream media in the Philippines reported the statement released by Comic Con Asia citing political unrest as the main reasons.

In order to clarify the issue, which according to some netizens was politicized by some, groups and picked by the local mainstream media, Hayley Atwell released an official statement through various social media channels such as Twitter, Instragram and Facebook posts.

Dear fans in the Philippines,

I'm so sorry to be missing the convention in Manila this weekend. I was looking forward to visiting your beautiful country and meeting you all.

Unfortunately the changes to my week schedule have made it impossible for me to travel so fat at this time.

You will hear more about these projects soon and I'm excited to share them when I can. I hope to see you at future Conventions soon.

The statement of Atwell was contrary to the major headlines of some of the country's mainstream media. Netizens reacted with the said controversy involving Atwell as they took to social media and lambasted Rappler, GMA News, ABS-CBN, PhilStar and CNN Philippines for spreading fake news about Atwell. 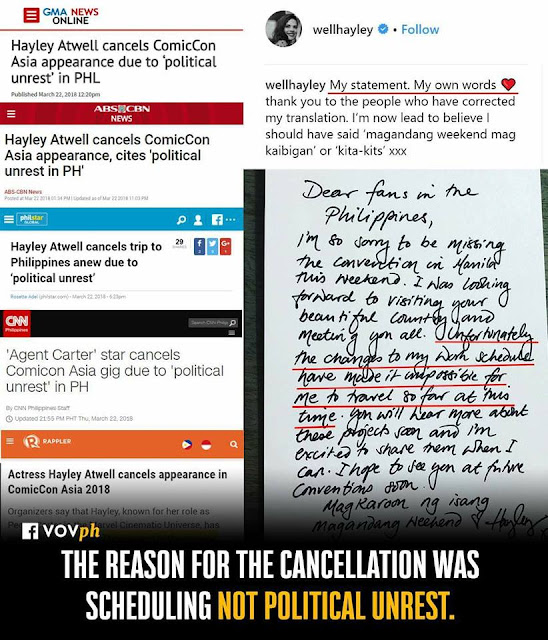