Must Watch: Pres. Duterte Silence Sen. Gordon for Criticizing His Decision to Appoint Military Men in His Cabinet

Posted by Phil Newsome on August 03, 2019
The President of the Republic silenced Sen. Richard "Dick" Gordon for publicly criticizing Pres. Duterte's decision to appoint former military generals to key and senior posts in his administration. 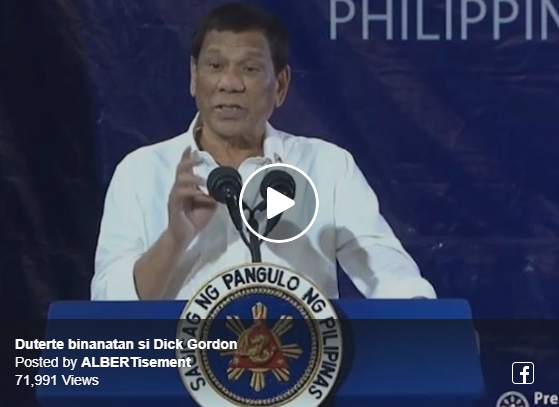 Sen. Dick Gordon was quoted as saying ""The only problem with the president, his bench is shallow. He comes from the province, he doesn't know people, so he relies on the military," Gordon told reporters earlier this week.

“It's a dangerous one because civilian authority must remain supreme over the military. It should be three years [after the officer has retired] before you appoint him, to make sure the ties are untangled—the ties that bind,” he said.

The remarks of the veteran lawmaker reached the President who responded by calling him out as "smart ass," arguing that uniformed personnel become civilians once they retire.

"Don't be too presumptuous about your talent. Why do you criticize me? It's my prerogative. It's not prohibited by law," Duterte said.

Pres. Duterte went on to poke fun at the physical appearance of the senator.

"At least I'm from the province. Your brain, Dick, is melting into your belly. You are a fart away from disaster. Understand your belly first," he said, referring to Gordon by his nickname "Dick."

"Your belly looks like a tadpole [Tiyan mo parang butete]," he added in Filipino.

The former Mayor of Davao City also ridiculed the lawmaker forhaving an American surname "You fool [gago ka]. You're not really a Filipino, you're Caucasian [tisoy]. Take care of your stomach. It's ugly. You're just a fart away."

The President also recalled an attempt of Sen. Gordon to be eleted to a higher post as he erred on saying that Gordon ran for Vice President when he actually ran for President in 2010.

The President reiterated his decision of appointing former military men because they get the job done and do not disobey his orders as the country's chief executive. 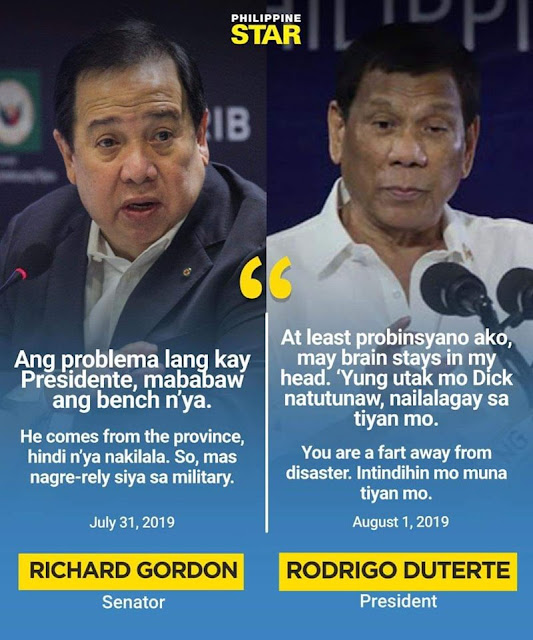