Posted by PhilNewsXYZ on August 01, 2019
An Anti-Duterte Blogger was arrested with after trying to extort P20K from the Office of Senator Bong Go and during the presentation of the suspects they tagged former Sen. Bam Aquino in an alleged black propaganda campaign against Hugpong ng Pagbabago Senate bets. 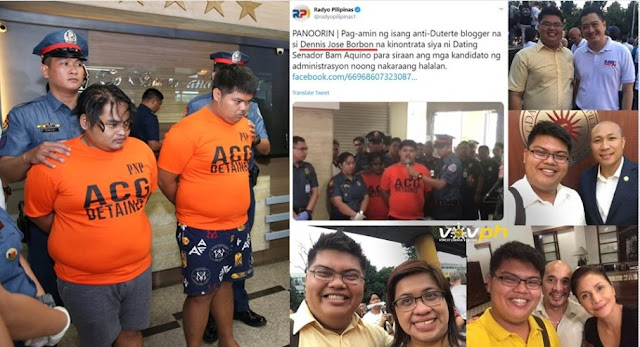 The suspect Anti-Duterte blogger was identified as Dennis Jose Borbon who was arrested with fellow scammer Edgar Paolo Bolara and they were presented during a press conference at Camp Crame this morning, August 1, 2019 by PNP Chief General Oscar Albayalde.

The mere mention of former Sen. Bam Aquino's connection with the Anti-Duterte blogger add more woes to the bitter election defeat of Aquino despite his recognizable family name in Philippine politics.

Borbon's confession made headlines on social media and to lend credence to his confession that he wa one of the bloggers under contract by Liberal Party as social media attack dogs, the FB Page VOVph posted the collage of photos of Borbon sharing a photo with different LP personalities and senate bets like Tañada, and Alejano as well as personalities like Agot Isidro and PAB's Jover Laurio.

Netizens took to social media and reacted with the recent arrest of the Anti-Duterte blogger who tagged the LP for alleged black propaganda against administration bets during the 2019 elections.