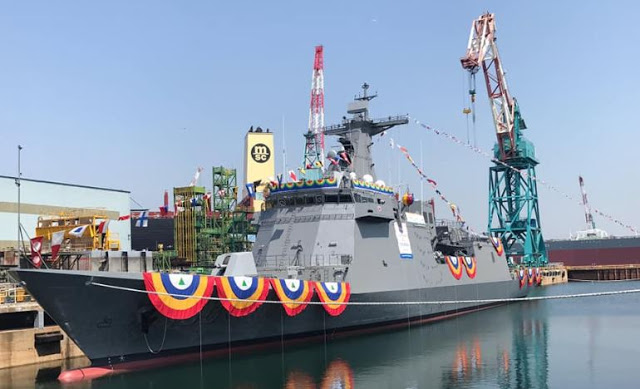 According to some military experts, the modern missile-armed frigate which will be known as BRP Jose Rizal (FF-150) is the first combat vessel designed and purposely acquired for the Philippine Navy under the administration of Pres. Rody Duterte.

Philippine Navy Spokesperson Capt. Jonathan Zata revealed that the entire Philippine Navy (PN) personnel are happy with his new development after decades of aspiratins of having a modern and brand new missile capable warship.

In an interview with the Philippine Navy spokesperson, Capt. Zata was quoted as saying "All of us are equally thrilled that we will soon be deploying a brand-new frigate, with anti-submarine, anti-surface, anti-air, and electronic warfare capability to patrol and protect our vast territorial waters," Capt. Zata stated.

The Philippine Navy said that BRP Jose Rizal will play a critical role in beefing up the country's anti-submarine, anti-surface and anti-air, and electronic warfare capabilities aside from providing training to new seagoing officers.

"These frigates are built based on the Incheon/FFX-I/HDF-3000-type multi-purpose frigate of the Republic of Korea Navy (RoKN), which offers increased operational performance and enhanced survivability," Zata said.

The ship measures 351 feet long and 46 feet wide and has a maximum speed of 25 knots and can travel up to 4,500 nautical miles at a cruising speed of 15 knots and can sustain operational presence for 30 days.