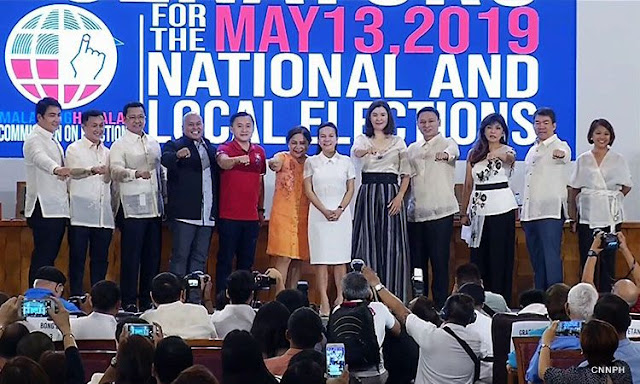 During the inauguration of the 12 winning seantors which are dominated by Duterte allies, gamely posed brandishing the famous Duterte fist but instead of following their fellow senators, Sen. Poe and Binay did not follow suit.

Sen. Grace Poe placed her hand on her chest, while Senator Nancy Binay raised her left hand and pointed upward, forming a "number one" sign, a signature of her United Nationalist Alliance (UNA).

The two lawmakers, Sen. Grace Poe and Sen. Nancy Binay, despite being part of the Senate Majority Bloc, did not get the endorsement of Pres. Rody Duterte and his daughter, Davao City Mayor Sara Duterte, the leader of Hugpong ng Pagbabago.

Nine of the winning senators in the 2019 senatorial race, got the endorsement of Pres. Rody Duterte and Davao City Mayor Sara Duterte.

According to some political analyst, the domination of Pres. Rody Duterte allies could have raised concerns that the chamber would not be independent - a fear that has been allayed by some senators-elect.