Posted by Phil Newsome on May 22, 2019
Presidential daughter and considered as a national political figure, Mayor Inday Sara Duterte released an official statement regarding the controversial speaker of the House issue which involved her name and her family's political plans. 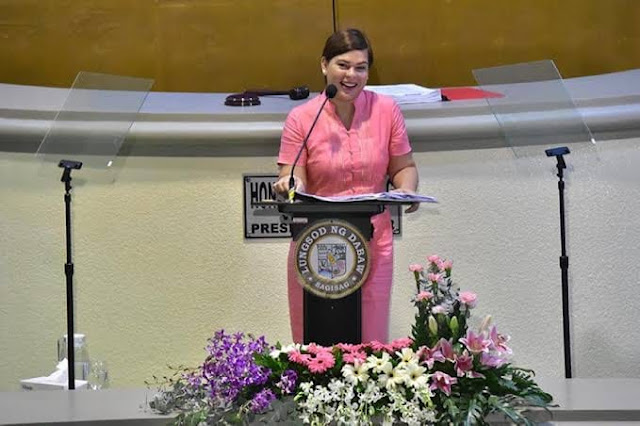 According to Mayor Sara Duterte there is no truth to the claims by Rep. Prospero Picah that she recommended Rep. Martin Romualdez as Speaker of the House. If she indeed raised Romualdez hands during the HNP rally, she did so because he, just like Rep. Lord Allan Velasco, is supportive of the reform agenda of Pres. Duterte.

The Mayor of Davao City also stated that she had no intention of accepting Rep. Bebot Alvarez's offer of reconciliation because the offer was deceiving and utterly lacked sincerity.

Mayor Sara also revealed that Cong-elect Alan Peter Cayetano came with a veiled threat, that if she endorsed Rep. Velasco for Speaker, she could break up the group which will affect the presidential elections of 2022.

There is no truth to the claims made by Rep. Prospero Pichay that I "recommended" Rep. Martin Romualdez as Speaker of the House. If I did raise his hand during the HNP rally in Tacloban, I did so because he, just like Rep. Lord Allan Velasco, is supportive of the reform agenda of President Duterte.

Meanwhile, I have no intention of accepting Rep. Bebot Alvarez’s offer of reconciliation because the offer was deceiving and utterly lacked sincerity. Unknown to him, he was surreptitiously videotaped when he threatened, after his win in the recent elections in Davao del Norte, “Ipapahiya ko si Sara.” Alvarez was and he remains to be a very dangerous, machiavellian individual who does not deserve peace.

Cong-elect Alan Peter Cayetano was correct when he said that he did not seek for my endorsement when he came to Davao to talk to me sometime last year. He, however, came with a veiled threat, that if I endorse Rep. Velasco for Speaker, I would break up the "group." And this, he said, will affect the presidential elections of 2022.

The question on the interest of Cong-elect Paolo Duterte to vye for Speaker of the HOR should best be addressed by our father because he is the President and our patriarch.

In sum, I am only the Mayor of Davao City. I am not the correct person to endorse someone to be the next speaker. I only have a personal bet but do not intend to influence Congress. It is best if the newly elected members of the House of Representatives individually decide who among those who are interested to become the next Speaker can truly bring good governance and positive change to congress, to the Filipino people, and to our country.