Posted by Phil Newsome on October 26, 2018
The daughter of the controversial but successful Chief of the Bureau of Customs (BOC), Mary Elizabeth Lapeña made headlines on social media for defending against the critics of his father, BOC Commissioner Isidro Lapeña. 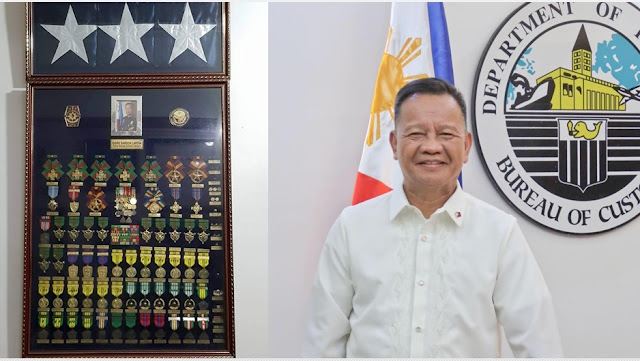 According to Mary Elizabeth Lapeña she rarely post about his dad, news about him and etcetera but she could no longer contain her emotion as she vented it all out, so that Filipino people whom his father served may know a little more about him before they throw their judgment.

The younger Lapeña admitted that she felt heartbroken with the recent turn of events under his father's leadership at the BUreau of Customs, despite the fact that her dad already served this country as a uniformed personnel for 34 years having little time to almost none for them and after nine years of retirement, the former PDEA and BOC head served again for nine years of retirement he wholeheartedly served again.

Based upon the information the younger Lapeña received, she revealed that even before this issue with the BOC erupted, there is already a fund set-up to discredit him leading to his removal from the BOC.

I rarely post about my dad, news about him etc. but tonight I just want to vent it all out. So that the Filipino people whom he fondly serves may know a little more about him before they throw their judgements.

I am truly heartbroken, my dad served this country as a uniformed personnel for 34 years having little time to almost none for us and after 9 years of retirement he wholeheartedly served again. First in PDEA and then in BOC. He was battling different syndicates from drug syndicates to sumgglers, etc.

From my knowledge, even before this issue errupted there is already a fund set-up to discredit him leading to his removal from BOC. This only means that he was already affecting their trade. Come Oct 16 may dad left for the US for the 91st birthday of my Lola. Only to find out 2 days after he left, this person, Lourdes made a media blowout when he was not here to be able to defend himself against these nonsense accusations.

They made a spectacle about this when he was gone. To the point that almost everyone was only able to hear her side of story, repeatedly, that everyone was made to believe this was the truth. Also, she never disclosed during her interviews that she was reshuffled, not getting the position she wanted, thus the rage. People believed her because she delivers her stories with rage and she indeed is a lawyer being able to use this logical fallacy "appeal to emotion" where she was able to manipulate the recipient's emotion to be able to win an argument and Filipinos are very emotional. They let their emotions overule their judgement, hence, my dad in their view is the "bad cop".

My only prayer, even from the beginning was, that God lead him towards what's best for him and where he can be safe. Maybe, this is the answer to my prayers. Maybe, this is for the best. That God is only protecting him from what may harm his health and his life.