Posted by Phil Newsome on September 18, 2018
A former Commissioner of the Commission on Audit (COA) made headlines earlier for her strong statement against the Duterte administration particularly the President as she said that the former Mayor of Davao City should "Respect COA," but veteran journalist Bobi Tiglao knew something about the former COA Commissioner Heidi Mendoza. 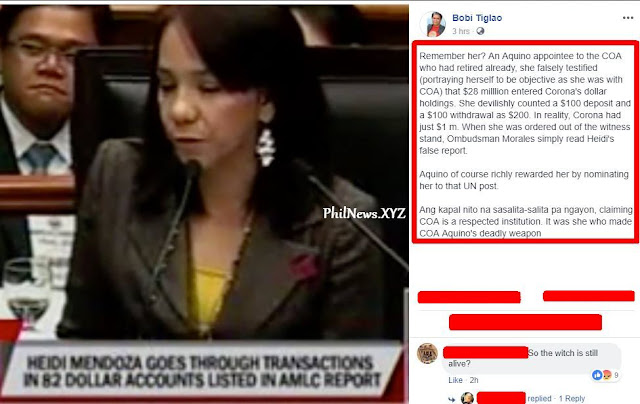 According to Bobi Tiglao on his latest Facebook post, the Filipino people should remember Heidi Mendoza because of her role in the Impeachment of former Supreme Court Chief Justice Renato Corona.

The veteran journalist and prominent diplomat Bobi Tiglao revealed that former COA Commissioner Heidi Mendoza is an appointee of former Pres. Noynoy Aquino who had retired already, but one of her contributions allegedly in the ouster of CJ Corona, was when she falsely testified that $28 million entered Corona's holdings.

Heidi Mendoza according to Tiglao devilishly counted $100 deposit and $100 withdrawal as $200. In reality CJ Corona had just $1 million. When Mendoza was ordered out of the witness stand, Ombudsman Morales simply read Heidi's false report.

After the ouster and the untimely death of CJ Corona, former Pres. Corona allegedly richly rewarded Mendoza by nominating her to that UN post.

"Remember her? An Aquino appointee to the COA who had retired already, she falsely testified (portraying herself to be objective as she was with COA) that $28 milllion entered Corona's dollar holdings. She devilishly counted a $100 deposit and a $100 withdrawal as $200. In reality, Corona had just $1 m. When she was ordered out of the witness stand, Ombudsman Morales simply read Heidi's false report.

Aquino of course richly rewarded her by nominating her to that UN post.

Ang kapal nito na sasalita-salita pa ngayon, claiming COA is a respected institution. It was she who made COA Aquino's deadly weapon."

In an earlier report involving Heidi Mendoza, she made pronouncements against the administration of Pres. Rody Duterte as she asked to respect COA. Heidi Mendoza was qutoed as saying "Give us respect for we deserve it," 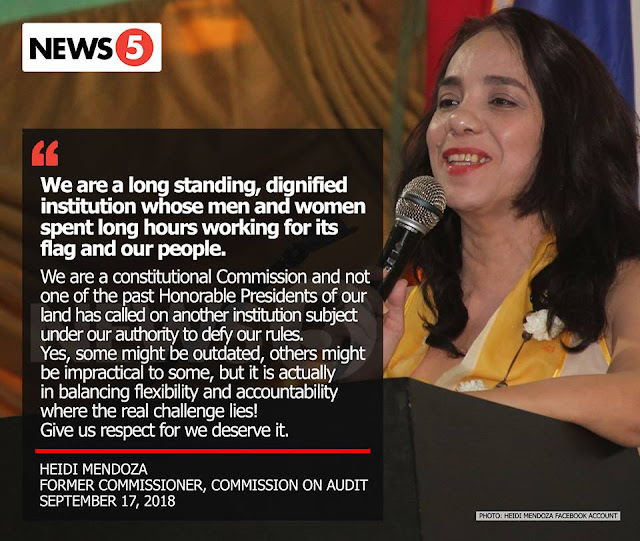 Heidi Mendoza served the state audit body, the Philippines Commission on Audit (COA) from 2011 to 2015. Mendoza also served as the Undersecretary General for the United Nations Office of Internal Oversight.

The United Nations Office of Internal Oversight Services (OIOS) is an independent office in the United Nations Secretariat whose mandate is to "assist the Secretary-General in fulfilling his internal oversight responsibilities in respect of the resources and staff of the Organization.

Bobi Tiglao alleged on his latest expose that Heidi Mendoza was richly rewarded by Noynoy Aquino during his term by appointing her to a top post in the United Nations.

In a separate post by Bobi Tiglao, he also revealed the following "Who prepared Ombudsman Morales' deception on Corona's dollar accounts? Heidi Mendoza, whom Aquino richly rewarded by lobbying for her to be at the UN auditor office. That job has a salary of $1.2 million yearly, making her the most richly rewarded among Aquino's minions."