Posted by Phil Newsome on April 16, 2018
A viral video is now circulating online about the alleged theft incident inside the Ninoy Aquino International Airport (NAIA) involving an OFW victim from Hong Kong. The viral video was originally captured by a certain Joseph Bacalso Carillo which already garnered more than 1.9 million views. 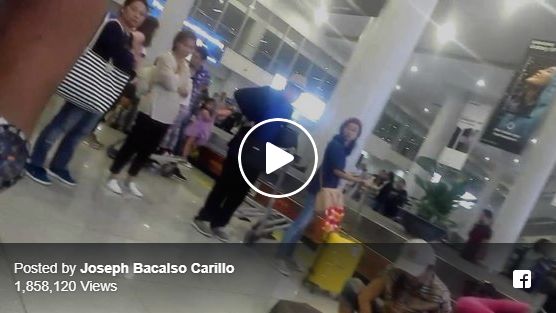 The uploader, FB user Joseph Bacalso Carillo stated in the comment section that the OFW victim was one of the passenger of Cebu Pacific Flight 5J113 from Hong Kong.

The viral video captured the moments when a furious OFW from Hong Kong discovered that some of her most important belongings missing on her company baggage.

Some of the items who were allegedly stolen includes imported chocolates, laptop, iPad and other precious belongings which the OFW put inside her company baggage.

Based upon the explanations of the OFW victim, she was forced to put some of her precious belongings to her company baggage because of the fact that her hand carried baggage was already over the weight limit and she even paid for some of her overweight baggage.

One of the airport personnel tried to pacify the furious OFW victim, the latest victim of alleged theft inside NAIA despite the stern warning of the DOTr and the administration of Pres. Duterte to stop any illegal activities inside the country's main gateway.