Posted by Phil Newsome on March 17, 2018
Prominent businesswoman and the alleged mastermind of the Pork Barrel Scam, Janet Lim Napoles was placed under Provisional Witness Program of the Department of Justice (DOJ). According to the documents released by the DOJ, Napoles has been "provisionally covered" by the Witness Protection Program since February 27, 2018. 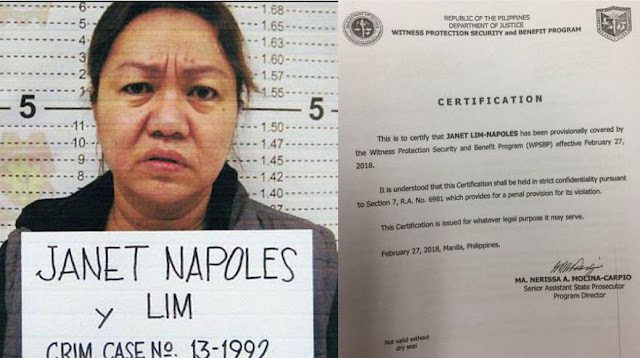 A copy of the DOJ Certification that Napoles is "provisionally covered" by the Witness Protection Security and Benefit Program signed by Senior Assistant State Prosecutor Ma. Nerissa Molina-Carpio submitted by Napoles counsel to the Sandiganbayan.

Subsequently, the lawyers of Janet Napoles requested for her transfer to the custody of the Department of Justice (DOJ) after her years of detention at Camp Crame.

The controversial businesswoman, Janet Lim-Napoles faces multiple plunder and graft charges filed against her in connection with the Pork Barrel Scam, which saw billions of pesos' worth of Priority Development Assistance Funds funneled to non-existent projects by the bogus non-government organizations which she owned.

The newly-admitted DOJ state witness, Janet Lim Napoles had earlier come out with her own list of lawmakers and other individuals she accused of being involved in the scam, but only selected personalities have been indicted.

Last January, Malacanang Palace revealed that Janet Lim-Napoles is a "central figure" in the controversy, should be allowed to speak after claimed that she gave a campaign donation worth P5 million to opposition leader Senate Minority Leader Sen. Franklin Drilon.