Posted by Phil Newsome on March 21, 2020
The tough-talking President of the Republic, President Rodrigo Duterte asked the Philippine Military and the PNP particularly their various camps to provide free accommodation and foods to stranded Filipinos in relation in the enhanced community quarantine in the island of Luzon. 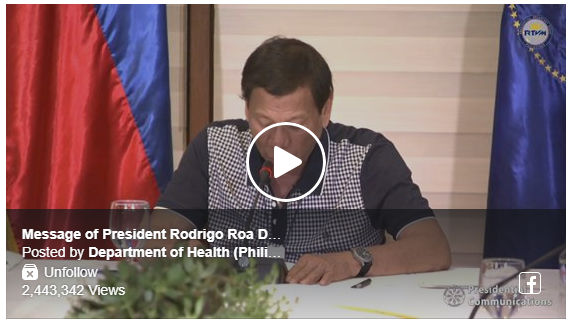 In a late-night message of the President to the Filipino people on March 19, 2020, he asked the military camps and PNP camps in various parts of Luzon to provide help to the affected residents in Luzon after he asked the Local Government Units (LGUs) to abide with his orders for an enhanced community quarantine.

Pres. Duterte announced that he's going to ask the military to help the stranded people because of the enhanced community quarantine ordered by the chief executive.

The President stated during a televised address that he's going to talk to the military about the possibilities of giving accomodation and food to the stranded people who cannot go to their homes because of community quarantine.

Your air force and your army will help you wherever you are, kung wala ka nang mauwian, kung wala na kayong matulugan, I am asking the military commanders from different camps all over the country that you can go there and ask accommodation at pagkain,” Duterte said.

The former Mayor of Davao City expressed concern to the people stranded because of the enhanced community quarantine.

Pres. Duterte also urged all LGUs to implement lockdown on their respective places "to save the people" from COVID-19. He also offered prayers to the people who are living in shanties because they are facing difficulties in practicing social distancing.