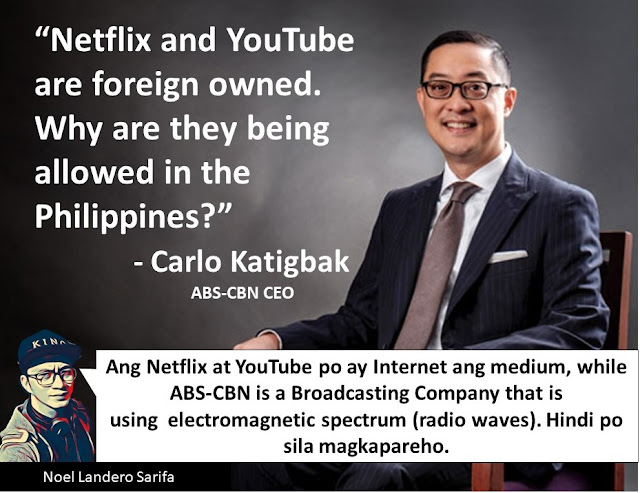 During the Senate Hearing, the CEO of ABS-CBN stated that Netflix and YouTube are foreign owned but why are they being allowed in the Philippines.

"Netflix and YouTube are foreign owned. Why are they being allowed in the Philippines?"

According to Sarifa the DICT told ABS-CBN that in the meantime, ABS-CBN and other networs should avoid offering pay-per-view services until there are no rules and regulations abou the matter, but still the company pushed with their PPV service with their blackbox.

NTC explained that the Department of Information and Communications Technology told them that in the meantime, ABS-CBN and other networks should avoid offering pay-per-view services until there are no rules and regulations about the matter, but still ABS-CBN pushed with their PPV service with their BlackBox.

The CEO, Mr. Katigbak mentioned companies like Youtube and Netflix which offering pay-per-view services despite having no franchise in the Philippines.

NETFLIX and Youtube is an ONLINE Service!Subscription Video On Demand (SVOD) They are not using radio/TV frequency like ABS-CBN.

At present, the Philippines does not have rules which regulate services offered by companies that deliver audio, video, or media content through the Internet.

While you ABS-CBN is a broadcasting company wherein the distribution of your audio or video content to a dispersed audience via any electronic mass communications medium, but typically one using the electromagnetic spectrum

Unlike Netflix and Youtube that are online services, your broadcasting is using air frequency that requires a license. Licensing became necessary as broadcast frequencies constitute a scarce resource. Were as online services will vary on internet speed and internet bandwidth.

It is not to be compared because they are using a different medium.

As CEO Mr. Katigbak should know the difference, he might not be a technical guy but should at least know how his network, works.