Posted by Phil Newsome on January 07, 2020
The report of the Vice President regarding the current situation in the country's war against illegal drugs was bombarded with angry emoticons and negative comments from netizens. 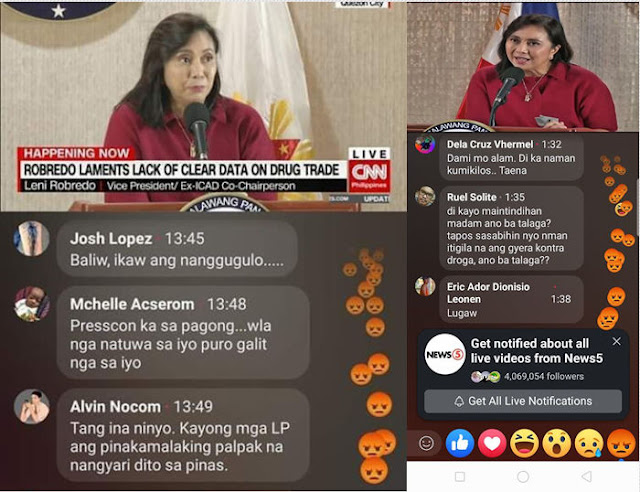 According to VP Leni Robredo's report on her short stint with ICAD, the government failed miserably on their efforts to stop one of the major problems in our society today. She laments lack of clear data on drug trade.

The Vice President even compared the failures of the government in which she is part, to an exam wherein the government only scored 1 over 100. "Failure talaga siya... Isipin na lang natin ung exam ito, ang magiging score ng pamahalaan ay 1 over 100." Robredo stated.

Netizens took to social media as they lambasted the Vice President for her alleged lies regarding her evaluations and report of the government's war against illegal drugs despite the fact that she only served a few months as co-chair of ICAD.

VP Leni Robredo's report was also critized by the President as he was quoted as saying "She has been there, how many days? 17?, 18. You know, I hate to say this, but how many voters are there in the Philippines? Just do away with the 200 thousand plus that she got as a majority over Marcos. It was really a mistake.

Pres. Duterte added further that "With a slim margin, and you talk big... you know for all these years, she has done nothing. She's a colossal blunder."


Read Some Comments From Angry Netizens: