Posted by Phil Newsome on January 19, 2020
Police Lt. Col. Jovie Espenido proved once and for all that he is doing his assigned job well, after his team seized an estimated P520,000 worth of illegal substances in Bacolod City but the highlight of the incident was during the time when Espenido prayed over suspects. 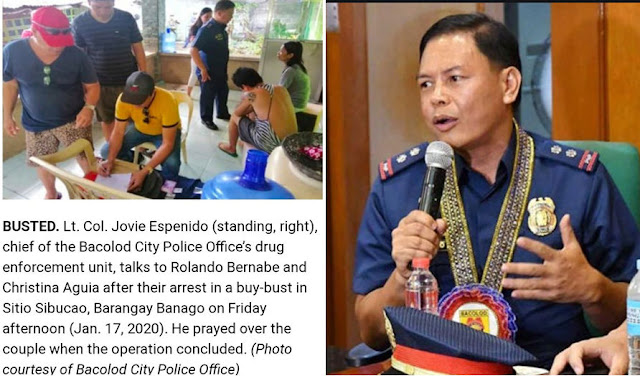 The most popular police in the country today, led his team on his first operation as head of the Bacolod City Police Office's City Drug Enforcement Unit (CDEU) on Friday leading to the arrest the suspects and recovering more than half-a-million kilos of illegal substance.

Aside from apprehending the suspects, the highlight of the operations came out during the time when Lt. Col. Espenido prayed over suspects Rolando Bernabe, 36, a high-value target and Ma. Christina Aguila 32, a street level target.

“Amon kang ginapasalamatan sa paghatag nimong higayon nga walay namatay. Labaw sa tanan among na-recover ang mga illegal nga mga butang nga gihuptan niining mga tawhana (We thank you for this opportunity, and that no one died. Above all, we were able to recover the illegal items from these people),” he added.

According to the initial assessment and validation, the operation in Sitio Sibucao, Barangay Banago, happened at around 2:45 PM. The suspect Bernabe sold a sachet of shabu worth worth P1,000 to an undercover police officer. He also yielded seven more sachets of the prohibited substance, a digital weighing scale, and cash worth P2,000.

Seized from Aguia were seven sachets of shabu, a mobile phone, and a black coin pouch. Their companion Ramie Poja Amodia evaded arrest.

Lt. Col. Espenido on Wednesday announced in a press conference that he was back on duty after almost two months of vacation to kick-off the CDEU’s campaign against drugs this year.

He invited people behind the organized drug groups operating in Bacolod to meet with him within January as a means to stop the illegal drug supply in the city. 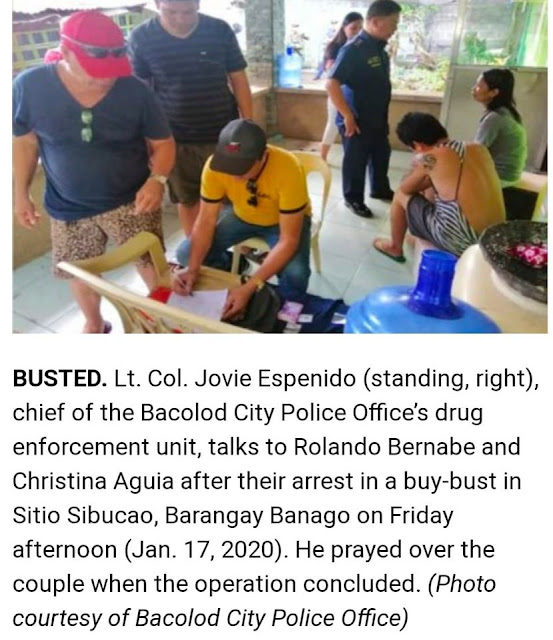