Posted by Phil Newsome on November 10, 2019
Veteran journalist and world-renowned TV Host Ted McDonnel burned down Rappler CEO Maria Ressa for her controvesial statement during an interview with the popular TV Show "60 Minutes" produced by CBS News in the United States. 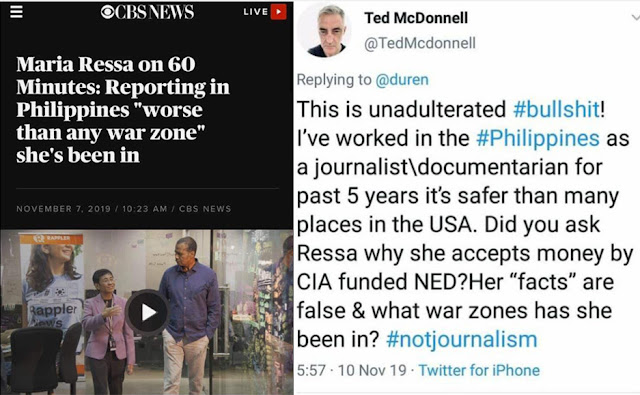 The popular award-winning photojournalist and book author, Ted McDonnel belied all the statement of Maria Ressa about the Philippines, particularly President Rody Duterte's War on Dr*gs.

Maria Ressa made some claims during an interview, likened the Philippines into a war zone due to the alleged killings which resulted from the government's war on dr*gs efforts.

Due to the controversial statement made by the Rappler CEO, Ted McDonnel responded by burning down Ressa as he stated some facts about the real situations in the country.

"This is unadulterated #bullshit! I've worked in the #Philippines as a journalist/documentation for past 5 years it's safer than many places in the USA. Did you ask Ressa why she accepts money by CIA funded NED? Her "facts" are false & what war zones has she been in? #notjournalism."

Presidential Communications Operations Office (PCOO) Undersecretary Joel Egco, who served as Executive Director for Presidential Task Force on Media Security echoed the statement of Ted McDonnel and even re-posted the tweets made by the veteran journalist.

Read the Statement of Joel Egco:

Thank you, Ted. I'd been targetted for assassination. I had covered wars and coups. Was actually shot at and bombed. But I never complained about anything because journalism is the path I chose. Till death part me with the job I loved, no matter how dangerous it could be. Otherwise, I would have left the job long time ago.
And, I never allowed myself to be used for propaganda. It's just me and my rights and freedoms... Albeit, perilous.
Happy Sunday, everyone!