Posted by Phil Newsome on September 04, 2019
Atty. Jude Sabio, the controversial lawyer of former lawmaker, Senator Antonio Trillanes made an explosive expose, revealing the ex-senator's link to Bikoy Videos in a tell-all newspaper column titled, "Abyss of No Return." 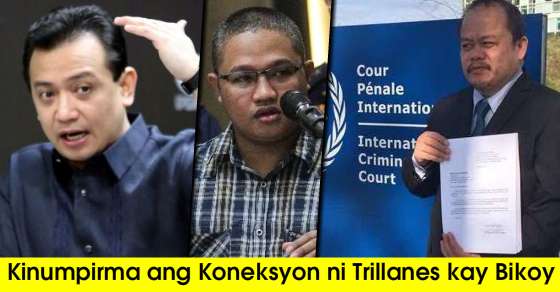 According to the veteran lawyer, who was once a trusted ally of Trillanes and made headlines earlier for filing the ICC case against Pres. Rody Duterte in The Hague, Netherlands, Sen. Trillanes had some alleged links with the Bikoy videos.

Atty. Jude Sabio gave a detailed account of his meeting with the controversial opposition lawmaker, Sen. Antonio Trillanes IV which he described as an "unusually turbulent."

During the alleged meeting with Trillanes, Atty. Sabio warned the senator to distance himself from Bikoy because it was just a trap, aside from that, the lawyer also confirmed that there's the dire lack of funds for the ongoing ICC case which he handled.

In the same meeting also, Atty. Sabio's wife, Jo ann A. Fortich, uncharactestically, butted in and told Trillanes not to push through his plan regarding the Bikoy video expose, because it will be the cause of his downfall that he will not recover.

The lawyer said that he was taken aback and angry by wife's behavior who spoke in a loud voice towards a senator while angrily pointing an accusing finger and crying at the same time while lambasting Trillanes.

Atty. Sabio who obviously know his wife very well, believed that his wife wasn't personally angry at Trillanes but she was simply trying to convey a dire ominous message like an oracle in antiquity portending of a terrible event to come.

The said meeting which was held at the Novotel culminated with Trillanes offering him to lawyer for Bikoy, which was first conveyed via viber message from Trillanes close-in security/staff Jonnel Sangalang.

Atty. Judge Sabio claimed on his reveal-all expose that he was caught by surprise of the viber message he received on April 23, 2019 because he had absolutely no idea about the senator's involvement with Bikoy.

Trillanes aide, Jonnel Sangalang represented to Atty. Sabio that Bikoy had "handlers" to whom he would be recommended to be his lawyer. The lawyer revealed that his tasked assigned by Sangalang was to file a complaint in the Office of the Ombudsman as soon as Bikoy went public.

Based on the story presented by Atty. Sabio on his newspaper column, it appeared that he was leaning on accepting the job offer from Trillanes. However, Sabio claimed that fate intervened to spare him from the disaster that had befallen instead later on the Flag and IBP lawyers.

Two days after the said meeting, the lawyer recalled that another Viber message from Trillanes' chief security and aide Jonnel Sangalang asking him about his license as a lawyer if it was updated in which he replied that lawyers need not to renew their license every year, unlike other professions, but the aide did not believe on his explanations which eventually led into falling out with Sen. Trillanes.

To know more about the full narration of the circumstances surrounding his decision to turn his back from ex-Senator Trillanes, just visit the link below. 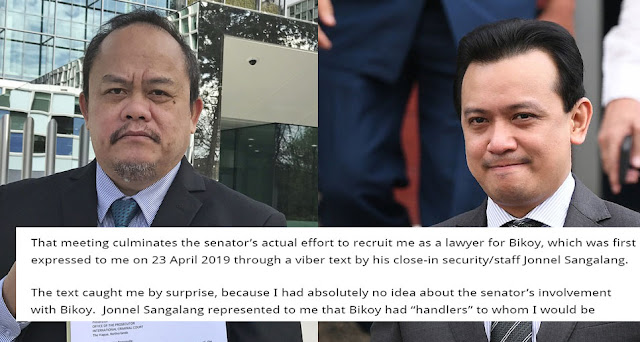