Posted by Phil Newsome on September 04, 2019
Concerned netizen Adolfo Mortera slammed two of the country's most controversial news network, Rappler and Inquirer which is now facing the possibility of libel case being filed by Presidential Spokesperson Salvador Panelo. 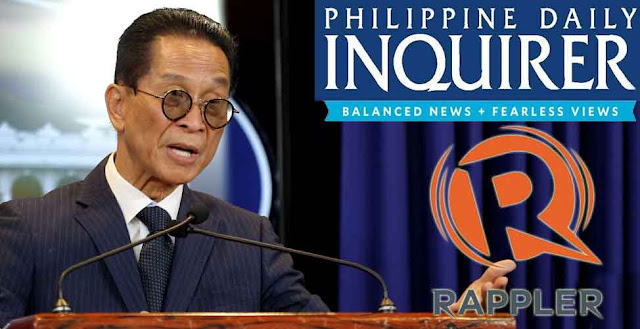 According to the concerned netizen on dissecting the real situations noted that family of former Mayor Antonio Sanchez wrote a letter to the Bureau of Pardons and Parole but Rappler and Inquirer reported that Panelo recommended the release of Sanchez.

Mortera stated that there could be real malice in the report as the reporters interpreted Refer as Recommend, which are two different things or "Bobo lang talga yung Inquirer and Rappler reporters."

Presidential spokersperson Salvador Panelo on Tuesday announced plans to file a libel complaint against two media outfits for claiming that he endorsed the application for executive clemency of convicted murderer-rapist Antonio Sanchez.

Panelo told reporters that he will file charges against the Philippine Daily Inquirer's news site Inquirer.net and Rappler over what he believed were malicious reports on his referral of Sanchez family’s letter for clemency to the Board of Pardons and Parole (BPP)

"Those articles they're reeking with not only irresponsibility but with malice. And it is libelous in nature because it imputes an act to discredit me in public and to tarnish my honor," he said.


The Palace official denied making a recommendation in favor of the release of Sanchez, because he was just doing the usual protocol of referring the case to concerned agencies and did not issue a recommendation and endorsement.