Posted by Phil Newsome on August 31, 2019
The Philippine national basketball team, Gilas Pilipinas started the game slow against FIBA World Rank No. 13 team, Italy for the 2019 FIBA World Cup held in China. Watch the live streaming coverage below brought to us by TV5 Philippines. 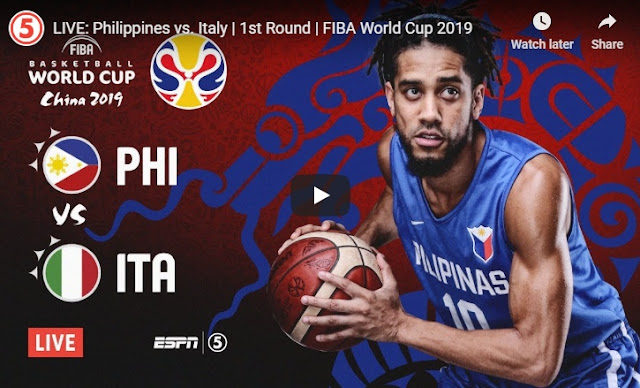 Gilas Pilipinas head coach Yeng Guiao and the Philippine squad face a top-caliber squad, one of the best team from Europe. The game started at around 7:30 PM (Manila Time).

Watch The Live Video Streaming Coverage of Gilas vs. Italy:

The Philippines vs. Italy game is currently held at Foshan City's International Sports and Cultural Arena.

The Italian National Basketball Team is ranke No. 13 in the world and the team is led by NBA Champion Marco Belinelli of the San Antonio Spurs, forward Danilo Gallinari of the OKC Thunder, and a squad of Euroleague veteran talents.

Gilas Pilipinas is ranked 31 in FIBA World Rankings and in terms of size, the Philippines is a smaller team compared to the Italian.

The youthful trio of Kiefer Ravena, CJ Perez, and Robert Bolick bring a new wave of talent to the team, while defensive stoppers Raymond Almazan, and Mark Barroca round up the roster assembled by head coach Yeng Guiao.