Posted by Phil Newsome on August 31, 2019
The Philippine communist movement is considered as Asia's longest-running struggle will probably end after Pres. Rody Duterte supported the Universal Health Care Act according to the statement released by the daughter of NPA Supremo. 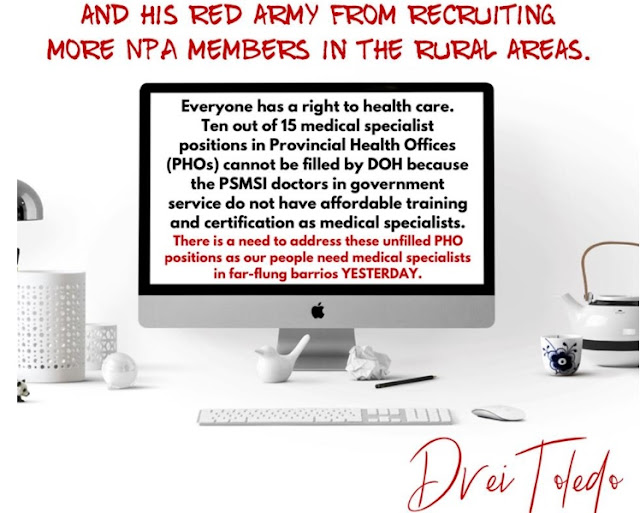 For the past few years, many Philippine President have tried to end the insurgency and communist rebellion in our country and all of them have failed miserably but this time around, Pres. Duterte could be answer to the problem.

The statement of the daughter of NPA Supremo identified as Antonio Lim Toledo went viral on social media after one of his daughter Drei Toledo shared her urgent call to stop the NPA from recruiting students.

In a viral Facebook post, Drei Toledo claimed that she can destroy the Red Army of his estranged father, with the help of all Filipinos, particularly the DDS who are supporting the call of the President to end insurgency in the countryside.

Hi. My name is Drei and my biological father is the untouchable NPA Supremo ANTONIO LIM TOLEDO. I have lived through hell and back being raped for the first SEVENTEEN YEARS of my life by this NPA terrorist I am unfortunate to have as a biological father. I need your help to destroy his red army through something that will benefit all of us and will effectively put a stop to my father and his NPA operatives from recruiting more covert members and footsoldiers from schools, universities, rural areas and GIDAs, the short term for Geographical Isolated and Depressed Areas.

Are you aware that 70% of our population live in the rural areas and the Geographically Isolated and Depressed Areas (GIDAs)? While Philippines may have successfully reduced maternal mortality rates in urban centers, this is not the case in far-flung barrios and the hinterlands where many unfortunate women still die of childbirth. The husbands who lose their wives and/or babies are easy targets for my father and his red army to recruit into the NPA.

"Walay doktor diri kay ang gobyerno pirti kakurakot...ang NPA ang naa diri kay kami ang naay guihimo para sa mga pobre nga Pilipino, apil na..." (There are no doctors here because the government is corrupt and doesn't care about you. The NPA is here because we are the ones who care about the masses...join us.)

What these NPA recruiters never tell their vulnerable new targets is the fact that doctors in government service who get stationed in far-flung barrios and the hinterlands are the NPAs primary target for kidnapping and cold-blooded MURDER.

Because the New People's Army can only manufacture an environment that makes them "relevant" to the people if they succeed in alienating non-NPA government officers from entering "NPA territories".

(I say "non-NPA government officers" precisely because my father has a lot of CPP-NPA-NDF operatives who are also still embedded in government.)

You might wonder, so how can ordinary Filipinos help me stop my father and his red army from recruiting and radicalizing our brothers and sisters in the hinterlands?

We can all do it by supporting the DOH and the Philippine Society for Medical Specialists Inc. (PSMSI) through its certifying exam and continuous training to its existing members, which hopes to fill the unfilled PHO positions of medical specialists in GIDAs where there are currently no doctors. Thus, this is a PARALLEL thrust to promote the Universal Health Care Law by improving access to and the provision of health services.

By supporting the Universal Healthcare agenda, you not only help me royally piss off my terrorist father and his red army, you also help yourselves.