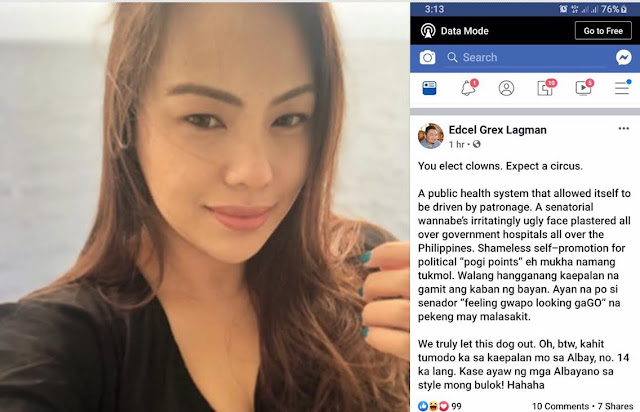 The Vice Governor is now under fire on social media from pro-admin bloggers who defended Sen. Bong Go against Congressman Edcel Lagman and his son, Vice Gov. Grex Lagman.

Krizette Chu responded to Lagman's social media post by declaring to her followers that hey have a new enemy to fight with.

The veteran blogger and social media defender of the President remarked that the younger Lagman isn't even worthy of a scum on Bong Go's shoe, including his entire family.

Krizette Chu went on to resurrect the old issue of corruption against the Lagman family who dominated the political scene in the Bicol Region.

Rep. Edcel Lagman was once involved in a controversial issue with Bishop Burce's allegation that Lagman owns a 30 million dollar mansion in the US, a 50 million house in Tagaytay, a hotel in Albay worth P500 million, commercial lands, printing press and many mor assets.

FEELING naman. YOU ARE NOT EVEN WORTHY OF THE SCUM ON BONG GO’S SHOE. You and your entire family.

In 2016, citing a COA report, ALBAYANOS BISHOP Hernando Bruce filed a complaint against Lagman the Father for accumulating 240 million pesos in cahoots with his daughter Krisel.

In 1987, Edcel Lagman had no house of his own and lived with his in laws.

After winning as congressman that year, “blessings of wealth” has been on his side.

Lagman accumulated 240 million between 2007-2010 as congressman, according to COA.

On top of this, Burce alleges that Lagman owns a 30 million dollar mansion in the US, a 50 million house in Tagaytay, a hotel in Albay worth 500 million, commercial lands, printing press.

In 2016, the bishop asked the COA to elevate the complaint to graft.

YOUR OWN PEOPLE DO NOT EVEN SPEAK FONDLY OF YOU.