Posted by Phil Newsome on June 21, 2019
A controversial and alleged Lumad Leader who claimed to be judge, Fulong Douglas Mangcal of Blaan tribal group challenges the government to present evidence that they have jurisdiction over a tribal chieftain and gives 72 hours to the Duterte to answer their inquiry and if they failed, Kapa should resume its operations. 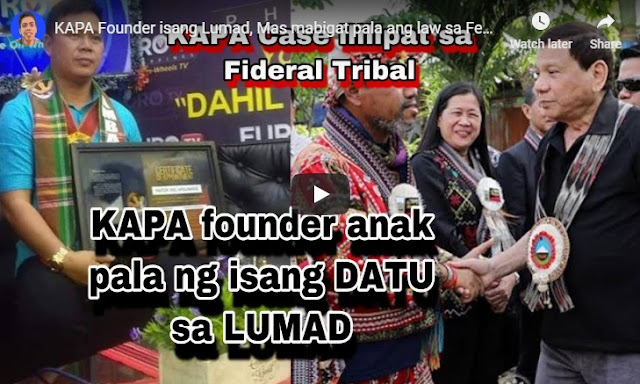 According to Judge Mangcal, Pastor Joel Apolinario is a Datu of the Kamayu Tribe in Bislig, Surigao Del Norte. After the death of Apolinario's father he was declared as the Datu or the chieftain of his tribe and was named as Datu Mamahandi.

The tribal leader claimed that all the Datus are united to implement the Republic Act 8371 for the welfare of all the indigenous people in the Philippines. The law is also under international law according to the explanations of the tribal leader.

Watch the Video of a Tribal Leader Defending Pastor Joel:


The law was approved way back 1997, the said law is also known as the Indigenous Peoples' Rights Act (IPRA) Law.

The IPRA Law is aims to recognize, protect and promote the rights of indigenous cultural communities/indigenous peoples, within the framework of national unity and development.