Posted by Phil Newsome on June 20, 2019
Concerned netizen and prominent defender of Pres. Duterte on social media, Adolfo Mortera claimed that the President's critics namely VP Leni Robredo, Sen. Hontiveros, Poe and Lacson are unworthy to become President or leader of our country. 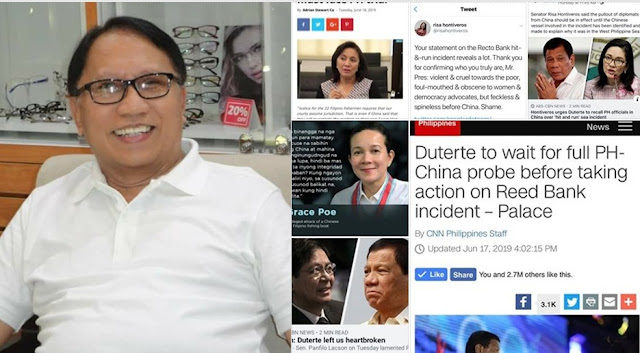 According to Adolfo Mortera the people he mentioned above are ignorant when it comes to international diplomacy therefore nobody among these critics of the President is worthy to be called as leader in our country.

Mortera stated that the Philippines don't need to declare war or send combat ships against another nation, big or small, unless we have all the right information about an issue and all correct reasons to do so.

A wrong and miscalculated move may end in grave consequences for the entire nation. VP Leni Robredo's suggestion that foreign nationals must face trial in our country without being in possession of all the evidence of wrongdoing are indeed ill-advised.

You don’t declare war or send combat ships against another nation, big or small, unless you have all the right information about an issue and all the correct reasons to do so. A wrong and miscalculated move may end in grave consequences for the entire nation.

You don’t demand (as the Fake VP demands) that foreign nationals face trial in our country without being in possession of all the evidence of wrongdoing.

And yes, it is a “small maritime” incident, which may even be accidental, compared to what could happen if we opted for more aggressive and confrontational actions.

And we may actually be better off heartbroken (as Lacson puts it) than suffer tremendous casualties in a useless & recklessly-initiated war.

THE PRESIDENT’S ACTION WAS ACTUALLY WISE AND SENSIBLE, IT IS NOT FECKLESS AND SPINELESS (as Hontiveros foolishly claims). IT IS NOT RECKLESS, RATHER IT IS THE MOST RESPONSIBLE COURSE OF ACTION BY A RESPONSIBLE LEADER OF A NATION.

Below is President Duterte quoted verbatim re: Reed Bank incident:

“In this matter of that incident na nagbanggaan ‘yung mga fishing boats. You read a lot about fumigation, anger, kung ano-ano na lang

You know, we are ruled --- as a civilized nation and as members of the community --- by the laws that govern whatever happen in the seas as we go along our business.

Alam ninyong mga sundalo miscommunication ‘yan, patay na. And we are not yet as ready. And we can never be ready in a nuclear war. Because in a nuclear war kung bitawan lahat ‘yan, Earth will dry up and we will all be destroyed and that is the end of everything.

And I do not now issue statement because there is no investigation and there is no result. Then the only thing that we can do is to wait and give the other party the right to be heard. Importante ‘yan eh.

Dalawang bangka lang ‘yan. Now you go there and create a tension. I said hindi ako g*** na Presidente na papayag nang ganun. If we have to die, we must have to die in the correct way and to die with dignity. Hindi ‘yang basta bangga ka bangga ka lang diyan.”