Posted by Phil Newsome on June 21, 2019
Former Governor and veteran farmer Secretary Manny Piñol of the Department of Agriculture (DA) exposed how government critics twists stories for their ends. A controversial photo of Sec. Piñol and the cook of GEM-VER 1. 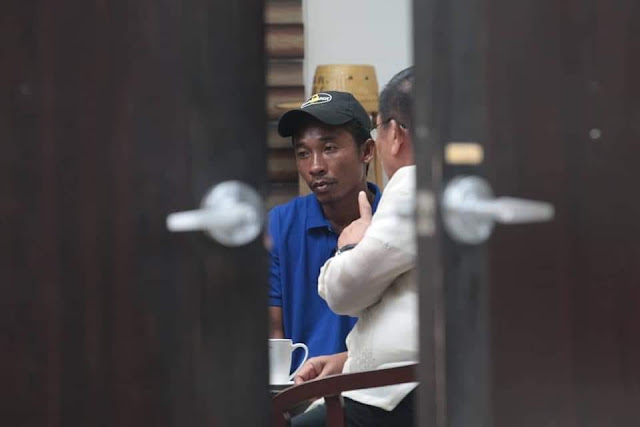 According to the DA Head he promised himself not to comment on the Recto Bank incident after he was able to fulfill his task but a photo of him pointing fingers with one of the fishermen is now doing the rounds online and misinterpreted by some netizens.

Secretary Manny explained what really happened with the said photo which was captioned by various critics with an intentions to discredit him on social media. The veteran farmer explained what really happened during the meeting and the reasons why he was captured pointing finger with the fisherman just to stress his points but was captioned by some netizens with negative statements.

According to the Agriculture Secretary, he was aware that someone could photographed him during the meeting but his mission is just to hear the story of the fishermen involved in the maritime incident in the Recto Bank. Secretary Piñol shared his frustrations with some biased media for posting a photo with a misleading caption.

This Is How Far Govt Critics
Twist Stories For Their Ends

I promised not to comment on the Recto Bank incident anymore after I have done my task last Wednesday but there is post which is a total lie that I need to address.

On Monday, June 17, in the receiving area of the Office of the Agriculture Secretary, I met with F/B GEM-VER boat owner Arlinda dela Torre and the cook, Richard Blaza, to hear their story on the maritime incident in the Recto Bank and ask them how the Department of Agriculture could help.

I had to know the circumstances surrounding the incident because the President might ask for a briefing since it involved fishermen.

This was the same meeting where Captain Junel Insigne was supposed to be present but he backed out as he was not feeling well according to him.

While we were conversing, our information officer, Solita "Baby" Onquit, told me that several media photographers wanted to take pictures.

She asked if it was okey to open the door slightly so the photographers could take pictures from a distance and I agreed.

So, through the slightly opened door pictures were taken.

I was aware that photos were being taken.

But you know how they are slanting this now?

PS: Apologies for the unintentional credit-grabbing."

This is how the critics of this administration distort facts just to push their agenda of destabilization.

By the way, my dare stands: If anyone would like to know if I intimidated or threatened any of the fishermen, go to San Jose, Occidental Mindoro and ask them.

Hear it straight from them!