Posted by Phil Newsome on June 21, 2019
Prominent political leader not only in Mindanao but in the entire country, Davao City Mayor Inday Sara Duterte released an official statement regarding the KAPA Ministry as she denied claims that she approved the religious group to continue their operations. 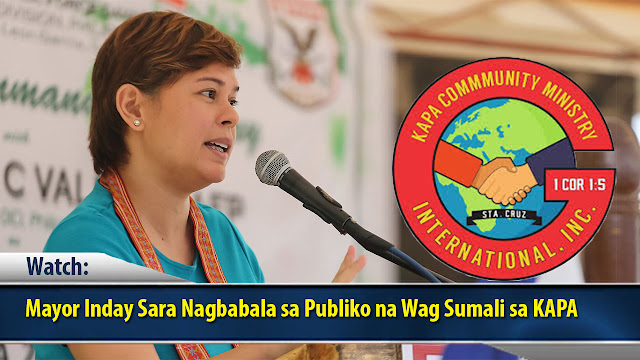 During a speech, the Presidential daughter discussed KAPA in Visayan language, as she stated that the members might have a hard time to get their hard-earned money back because its members are using the term "donate" instead of "investment" in putting up their money to the group's coffers.

The Mayor of Davao City also revealed that the tactics used by Pastor Joel Apolinario is what we called Ponzi Scheme and all members and her audience should find time to research about the said scheme.

According to Inday Sara, Apolinario is having an advantage in the issue because he believes that no members of KAPA would file charges against him. But there's a catch, they might have a chance to get their investment back if they're going to act early.