Posted by Phil Newsome on June 11, 2019
A concerned netizen and veteran micro-blogger Krizette Laureta Chu shared a very brilliant idea on how to stop the controversial investment scams in the country by writing an Open Letter to the President of the Philippines. 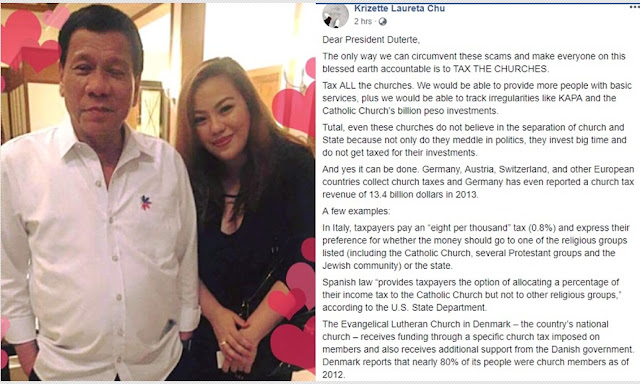 According to Krizette Chu the only way we can circumvent these investment scams and make everyone on this blessed earth accountable is to Tax the Churches.

The concerned netizen stated that in taxing all the churches the government would be ble to provide more people with basic services, plus we would be able to track irregularities like KAPA and the Catholic Church's billion peso investments.

One of the reason why we should tax the church is because of the fact that they don't believe in the separation of church and State, because not only do they meddle in politics, they invest big time and do not get taxed for their investments.

The only way we can circumvent these scams and make everyone on this blessed earth accountable is to TAX THE CHURCHES.

Tutal, even these churches do not believe in the separation of church and State because not only do they meddle in politics, they invest big time and do not get taxed for their investments.

And yes it can be done. Germany, Austria, Switzerland, and other European countries collect church taxes and Germany has even reported a church tax revenue of 13.4 billion dollars in 2013.

In Italy, taxpayers pay an “eight per thousand” tax (0.8%) and express their preference for whether the money should go to one of the religious groups listed (including the Catholic Church, several Protestant groups and the Jewish community) or the state.

Spanish law “provides taxpayers the option of allocating a percentage of their income tax to the Catholic Church but not to other religious groups,” according to the U.S. State Department.

The Evangelical Lutheran Church in Denmark – the country’s national church – receives funding through a specific church tax imposed on members and also receives additional support from the Danish government. Denmark reports that nearly 80% of its people were church members as of 2012.

Two other northern European countries – Sweden and Finland – also collect church taxes from members, both at rates that range from 1% to 2%.

In Switzerland, church taxes are imposed at the canton level; most of the 26 cantons, or states, collect a church tax in some form. In some cantons, private companies must pay a church tax, according to the State Department, which also reports that some cantons collect taxes “on behalf of the Jewish community,” but that “Islamic and other ‘nontraditional’ religious groups are not eligible.”

Iceland’s church taxes are collected from members of registered religious groups – including secular humanist organizations.
In some of these countries, there are churches that will only serve those who have paid up. For instance, the Catholic Church in Germany has forbidden those who do not pay their church taxes from receiving communion.

IN THESE VARIED OPTIONS, THE STATE CAN MONITOR THE INCOME OF THE CHURCH.

Your worshiper in the Church of Poon.