Netizen Raises Doubts on Pinoy Fishermen After the Captain Decided to Back Out from Pres. Duterte's Meeting

Posted by Phil Newsome on June 17, 2019
A concerned netizen who is also a prominent social media personality Krizette Laureta Chu raises some doubts on Pinoy fishermen who were victims of the Chinese ramming at Recto Bank after the captain decided to back out from the scheduled meeting with Pres. Rody Duterte. 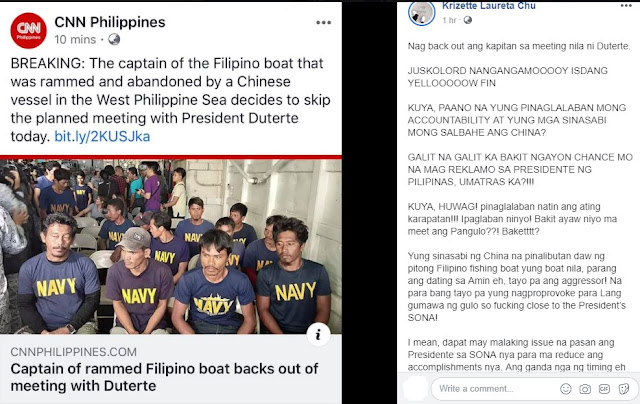 According to some major news media outlet the captain of the Filipino boat that was rammed and abandoned by a Chinese vessel in the West Philippine Sea decided to skip the planned meeting with President Rodrigo Duterte on Monday.

The captain who was identified as Captain Junel Insigne, made a last-minute decision to head back to his home in Occidental Mindoro instead of going to meet with the President to present what really happened during the controversial Recto incident.

Krizette Chu questioned the decisions of the boat captain because of the rare chance wherein he can explain everything that happened during the incident. It is also a rare opportunity wherein the fishermen can air their complaints against the President and the alleged Chinese vessels and nationals.