Posted by Phil Newsome on June 20, 2019
KAPA Community Ministry International Incorporated Founder Pastor Joel Apolinario blamed the President for the immediate closure of all KAPA offices and their operationgs after the NBI raided their offices. 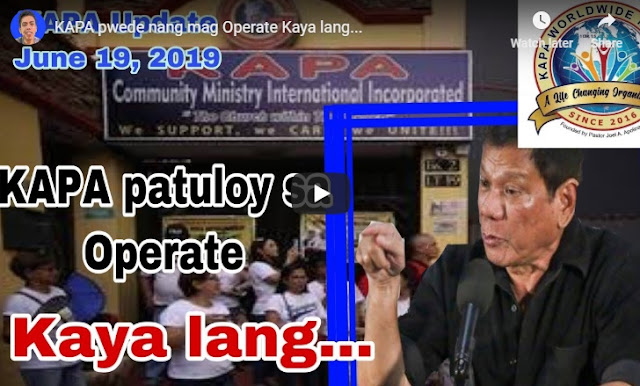 According to the controversial religious leader despite the presence of "Writ of Premilinary Injunction," at the hands of KAPA Ministry, the judge still proceeds with issuance of a search warrant to all Kapa offices including the house of the Kapa founder.

In the latest radio interview aired yesterday, Pastor Joel Apolinario blamed the President for its action against Kapa which resulted into freezing all of Kapa's assets and businesses.

Despite the decision of the President to closed down KAPA and all its assets, Pastor Joel Apolinario still asked for consideration to continue Kapa's operation because people are defending on Kapa for their survival.

The farmer-turned-millionaire asked the President to continue their operation because there are some reports that one of Kapa member committed suicide after losing hope that Kapa will continue its operation.