Posted by Phil Newsome on June 20, 2019
Veteran actor Eddie Garcia passes away at the age of 90 years old on Thursday. The sad news was confirmed to the media by Dr. Tony Rebosa, spokesperson of the Garcia Family. 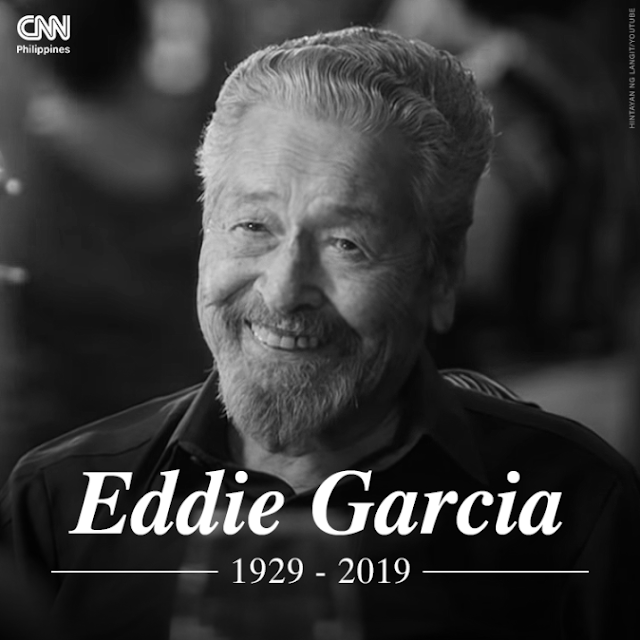 Eddie Garcia died at 4:55 PM of June 20, 2019, according to the medical bulletin issued by the Makati Medical Center.

Based upon the initial findings on Garcia illness, he suffered a neck injury after falling to the ground while taping for his television series last June 8, 2019.

The TV Network, GMA has since said that it is looking into the absence of a medical team during the filming of the said TV series on the set.

During one of Eddie Garcia's interview with CNN Philippines when asked about plans for retirement, the actor responded by saying that "retirement was not in his vocabulary."

The versatile actor Eddie Garcia left behind an impressive and unforgettable legacy in the showbiz industry in the Philippines that spanned nearly 7 decades of experience, with over 600 films to his name as an actor and film director.

Eddie Garcia whose real name is Eduardo Verchez Garcia was born on May 2, 1929, in Juban, Sorsogon. His parents were Antonio Garcia and Vicenta Verchez.

Garcia spent his early years in the province but after World War II, he was stationed as a military policeman in Okinawa, Japan.

Eddie Garcia was discovered by the entertainment industry after a certain George Sanderson convinced him to try out as one of the talents for director Manuel Conde, who was developing a swasbuckling film, "Siete Infantes de Lara."