Posted by Phil Newsome on June 10, 2019
The tough-talking President Rody Duterte says he has 'lost completely in the Philippines media," due to numerous fake and malicious news being spread by some biased media. 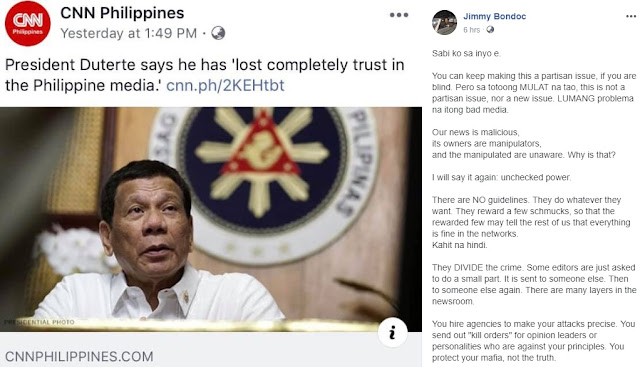 One of the President's avid supporter and veteran singer Jimmy Bondoc agrees with the President's statement as he stated that the biased media issue is no longer a partisan nor a new issue, it is indeed an old issue involving bad media.

Jimmy Bondoc claimed that our news is malicious, its owners are manipulators and the manipulated are unaware, in other words its unchecked power.

There are no guidelines for the biased media, they do whatever they want, they divide the crime. Some editors are just asked to do a small part. It is sent to someone else, then to someone else again. There are many  layers in the newsroom.

Our news is malicious,
its owners are manipulators,
and the manipulated are unaware. Why is that?

I will say it again: unchecked power.

There are NO guidelines. They do whatever they want. They reward a few schmucks, so that the rewarded few may tell the rest of us that everything is fine in the networks.
Kahit na hindi.

They DIVIDE the crime. Some editors are just asked to do a small part. It is sent to someone else. Then to someone else again. There are many layers in the newsroom.

You hire agencies to make your attacks precise. You send out "kill orders" for opinion leaders or personalities who are against your principles. You protect your mafia, not the truth.

You "scale down" the successes of your enemies. Para hindi marami ang makabasa / makakita sa mga magagandang balita. But you twist and exaggerate and misrepresent the little faults, molehills become mountains. A little twist here, a little pause there...

By the time it is all finished, the truth has been sucked out of it, leaving behind residual trash of lies and self-serving politics, in favor of the highest bidder, as approved by the boss.

Maawa po kayo sa Pilipinas.
Walang bago sa sinasabi ko.
Please stop pretending, as if you are hearing this for the first time.
---

We WILL be free! We WILL get there.
But the next revolution must be staged.
It is the WAR against liars, the malicious media.

The GOOD mediamen become victims too. Their truth is diluted, and they are excluded from the bribe sharing. In the end, truthful men's careers suffer a slow, painful demise.

You feed your families with blood money,
not fully conscious of the lives you destroy with your "Slants", and the fights you incite with your lies.

Yes, may mga naloloko pa kayo.
You can still turn people against the President,
or even against someone as small as me.
But the rest of the world is onto you.
I truly believe your time has come.

You keep trying to pass the blame, but the truth is, it has always been your fault.
Kayo ang may gawa nito.
You have destroyed freedom of speech with your abuses and your skewed politics.

Your jobs should soon be given to the worthy.
Or who knows? Maybe you will have a genuine change of heart.
God always knows best.