Posted by Phil Newsome on May 28, 2019
Veteran singer turned government official Jimmy Bondoc made headlines earlier on social media because of his blind item and expose about the possible closure of one of the country's largest TV stations, revealed the next step of the alleged network to ruin his career and credibility. 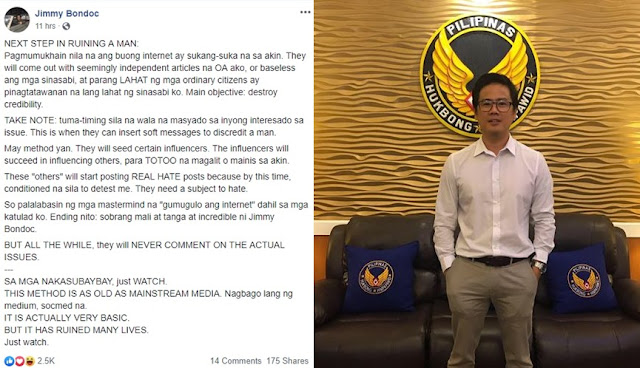 According to Jimmy Bondoc, the next step to be made by the said TV station is to ruin his career and credibility. They will make sure that netizens will no longer believe on Bondoc's testimony and credibility.

The said company will come out with seemingly independent articles accusing bondoc of being an OA individual, or they will publish baseless stories, and ordinary citizens will then laugh it out on Bondoc's testimony and the main objective is to destroy the credibility of Jimmy Bondoc.

Bondoc revealed that the said TV Network will employ a method wherein they will seed certain influencers, once the influencers will succeed in influencing others, that others will get angry with Jimmy Bondoc. They will then start posting real hate posts because by this time, they are already conditioned to detest Bondoc.

May method yan. They will seed certain influencers. The influencers will succeed in influencing others, para TOTOO na magalit o mainis sa akin.

These "others" will start posting REAL HATE posts because by this time, conditioned na sila to detest me. They need a subject to hate.

BUT ALL THE WHILE, they will NEVER COMMENT ON THE ACTUAL ISSUES.
---
SA MGA NAKASUBAYBAY, just WATCH.
THIS METHOD IS AS OLD AS MAINSTREAM MEDIA. Nagbago lang ng medium, socmed na.
IT IS ACTUALLY VERY BASIC.
BUT IT HAS RUINED MANY LIVES.
Just watch.