Posted by Phil Newsome on March 25, 2019
Veteran broadcast journalist Erwin Tulfo confronts the Chief Executive Officer (CEO) and Founder of Paysbook E-Commerce System, Arjay Gallenero for the reported scam business and to explain his side of the story. 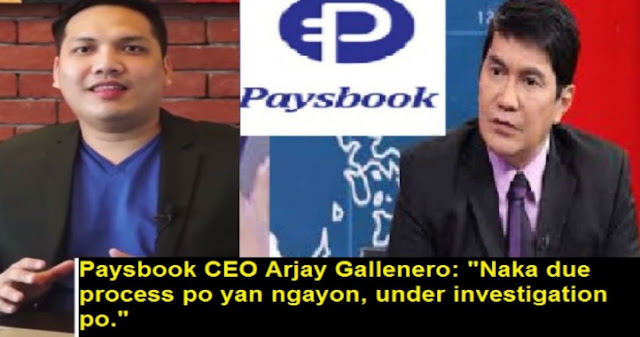 Tulfo presented some evidence and documents from the Department of Trade and Industry (DTI) and from the Securities and Exchange Commission (SEC).

Watch the Video of Erwin Tulfo:

According to the official statement of Securities and Exchange Commission, they already have a series of warning against Paysbook and the company don't have any license and has no rights to solicit some investments from the general public.

Paysbook CEO Arjay Gallenero admitted that they indeed received an advisory from SEC and the case is still under due process and under investigation by the SEC.

Gallenero explained that they need some compliance that were required by the Securities and Exchange Commission (SEC). The Paysbook CEO that they were indeed having some investment schemes, but the truth according to Paysbook that they are not selling investments but online services.

Read Some Reactions from Concerned Netizens: