Sarcastic Message to Pres. Duterte from a Thankful Patient's Father Calling Him a Dictator Went Viral

Posted by Phil Newsome on October 26, 2018
A sarcastic message to the President of the Philippines from a thankful father of a patient who was discharged from a hospital free of charge courtesy of the Duterte government went viral on social media. 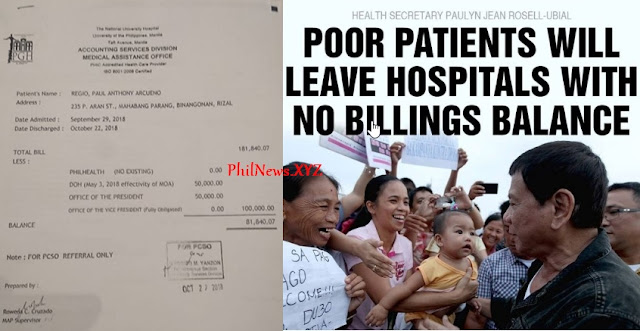 The father of the patient, who is also a concerned netizen was identified as Antonio Regio who narrated his experience about his son's hospitalization expenses.

According to Antonio Regio, the paper showing the receipt of his total bills from UP-PGH only showcased how "evil" President Duterte is in helping the poor and the needy.

Regio noted that he was supposed to pay at least P182,000 for the hospital bill of his son, but all were shouldered by the Duterte administration. Not even a single centavo was paid by the victims and the family of Regio.

Based upon the documents presented by Antonio Regio, he has no PhilHealth coverage, but the DOH provided P50,000 while the Office of Pres. Rody Duterte added another P50,000 while the remaining P82,840.07 bill was forwarded to the PCSO and the agency provided the much needed finances.

Aside from Antonio Regio numerous netizens also commented and shared their experience of having given some financial assistance from the Duterte administration which they claimed as a rare occurrence during the previous administration.