Posted by Phil Newsome on October 29, 2018
Popular blogger who has more than one million followers on Facebook, Thinking Pinoy shared an article on how the Department of Health (DOH) Regional Director of Calabarzon apologized to parents of Dengvaxia victims for the messed allegedly created during the administration of Noynoy Aquino and the DOH leadership of Sec. Garin. 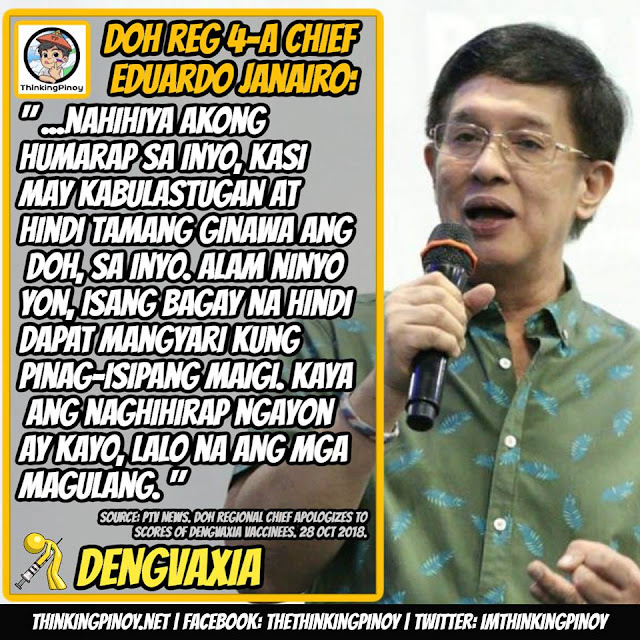 According to Dr. Eduardo C. Janairo, regional director of the DOH Calabarzon, the effects of the Dengvaxia vaccination scare and hysteria in the region is now widespread, even as other parents and their children vaccinees have continued to seek the health department's various health services.

The DOH Chief in Calabarzon added further that the effect is really big after the DOH vaccination program durng the time of Sec. Garin and they really have to monitor them, strengthen their immune system and if possible exhaust all efforts to assist them especially in mental services to ease their anxiety and depression withch could affect their livelihood, Janairo noted.

According to the DOH in Calabarzon they are in partnership with the provincial and city health offices, in assuring hundreds of Dengvaxia vaccinated school children and their parents, who gathered at the LLC Auditorium, Central II Elementary School in Calamba City, Laguna, of the DOH's continuing physical, psycho-social interventions and various mental health services.

Dr. Janario also disclosed that Calabarzon Region has around 172,000 vaccinees and 45 have died although the death toll could not be conclusively attributed to the Dengvaxia vaccine as health probe continues since there may be other causes of the victim’s death.

Dr. Janairo also reported that burial assistance has been extended to around eight patients although one victim has yet to receive the said assistance, pending submission of the original documentary requirements and the support of the Local Government Units.