Posted by Phil Newsome on October 29, 2018
Veteran blogger and radio host Mark Lopez exposed the Dilawan propagandists Edwin Lacierda and Jover Laurio for spreading fake news and asserting that the Dalian trains hastily purchased by the Aquino administration were not ready to be utilized 2 years ago. 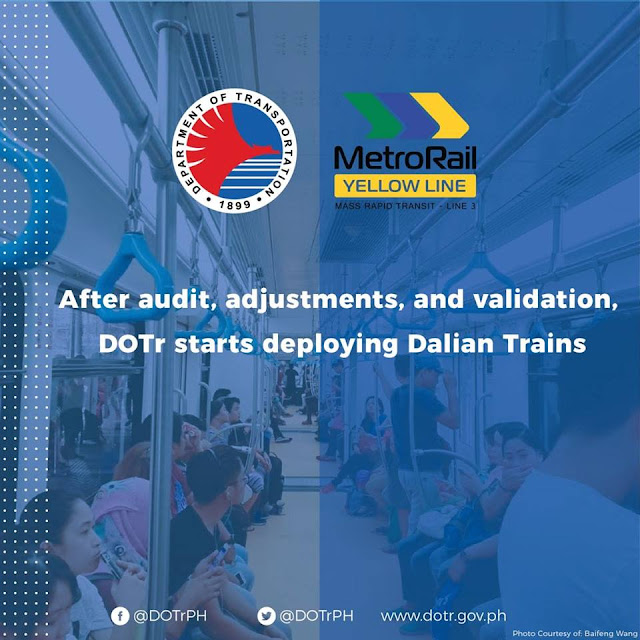 The Dilawans were allegedly spreading fake news that the cause of the delays of the Dalian trains was politically motivated despite the facts presented by the Department of Transportation (DOTr) about the real status of the trains.

Mark Lopez cite a statement released by the DOTr that an exhaustive safety audit and assessment were needed to be done, and extensive adjustments were necessarily made before these trains were finally approved for deployment.

The veteran blogger also reminded the Dilawans critics of the Duterte administration that the Dalian trains were purchased by the Aquino admin a few months before the 2016 national elections. All the critics wants is to used the Dalian trains even without proper procedures because of mismatch in terms of rail and signalling sytem of the newly purchased trains.

Mark Lopez also reveaed that the Aquino Admin was willing to compromise the safety of the commuters because of greed.

Here's Some Parts of the DOTr Statement:

In what could be considered a major milestone in the operations of the Metro Rail Transit Line 3 (MRT-3), the Department of Transportation-MRT3 started yesterday, 27 October 2018, the gradual deployment of new trains from CRRC Dalian.

The milestone comes after an extensive, rigorous, and multilevel audit, assessment, adjustment, and validation of the 48 Dalian trains that were delivered between September 2015 to January 2017. The Independent Safety Audit and Assessment was conducted by TUV Rheinland, an ISO 17020 and 17025 certified German company.

Among the concerns that needed to be addressed were issues on weight, signaling, and maintenance equipment compatibility. DOTr Secretary Arthur Tugade himself asked CRRC Dalian to address these and perform all other identified adjustments at NO COST TO GOVERNMENT.

As CRRC Dalian started working on the necessary adjustments in July 2018, Japanese company Toshiba Infrastructure Systems supervised and assessed the process to ensure that they addressed the open observations of TUV Rheinland.

An MRT-3 Advisory Panel, consisting of railway specialists from the Asian Development Bank (ADB), Australia Aid, and local experts from the Philippine National Railways (PNR), also participated in the evaluation and validation.