Posted by Phil Newsome on September 14, 2018
Controversial lawmaker and considered as one of Pres. Duterte's most vocal critics, Sen. Antonio Trillanes is now facing a new legal battle after Labor Undersecretary Jacinto Paras filed on Friday a case of inciting to sedition or inciting to coup d'eta against the Senator. 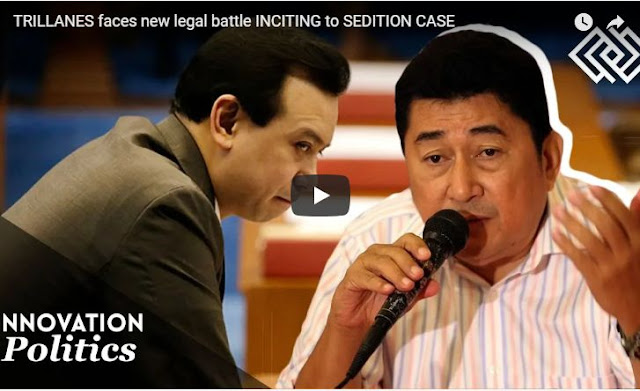 The Labor Undersecretary earlier filed charges of grave threats against Sen. Trillanes over the senator's statement allegedly made against him on the sidelines of a Senate Inquiry in June.

The case against Trillanes filed by Paras, inciting to sedition is the latest among the opposition senator's legal woes which include the withdrawal of his amnesty and a libel case.

Sen. Antonio Trillanes case was filed by Jacinto Paras at the Pasay City Fiscal's Office. The Labor Undersecretary previously said that the charges stem from Trillanes' alleged efforts to prod soldiers to rebel against President Rodrigo Duterte and for supposedly calling the chief executive "insane."

The controversial senator who have been holed up in his office at the Philippine Senate since Tuesday last week is facing possible arrest after Duterte voided his amnesty over 2 failed military uprisings in 2003 and 2007.

Sen. Antonio Trillanes, in 2017, claimed Paolo and brother-in-law Manases Carpio were involved in a scheme to extort money from ride-hailing firms.