Posted by Phil Newsome on September 10, 2018
One of the country's most popular action star and considered himself as a solid supporter of Pres. Rody Duterte admitted during an interview with some media that his official Facebook account was shut down after being accused of being too loud. 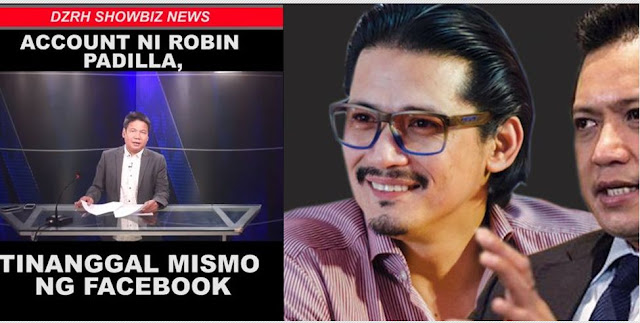 The shutting down of Robin Padilla's Facebook account came out after his controversial statement against Sen. Antonio Trillanes whom the actor accused of being afraid to face his cases by hiding inside the Philippine Senate. During the first day of announcement that Sen. Trillanes could be arrested due to his void amnesty, Robin Padilla waited patiently outside the Senate just to witness the arrest of Trillanes.

Robin Padilla also revealed that he did not know at first that his Facebook account was already shut down by Facebook Philippines. In an interview with DZBB, Padilla was quoted as saying "Masyado raw akong maingay (I was too loud for them), Padilla said.

Watch the Video Report of DZRH:

After the shutting down of Robin's Facebook account, the actor still took a shot at Sen. Trillanes for hitting Pres. Duterte: "Kung i-address yung Presidente kala mo kung sino siya. Bastos ka eh kaya ka binabastos." (When you address the President you think you're bigger than him. You're an insulting person that's why you get insulted.)

The veteran action star made headlines earlier when he shared a live video with his more than 1 million followers calling the attention of Sen. Antonio Trillanes to come out of the skirts of the Senate, with the senator telling him to grow up first before talking to him.