Posted by Phil Newsome on September 10, 2018
Some netizens who saw the exclusive interview by CNN's The Source Host Pinky Webb with Chief Legal Adviser Atty. Salvador Panelo claimed that Pinky Webb was burned down by the veteran lawyer on their discussion about Gazmin's alleged usurpation case in approving the amnesty of Trillanes. 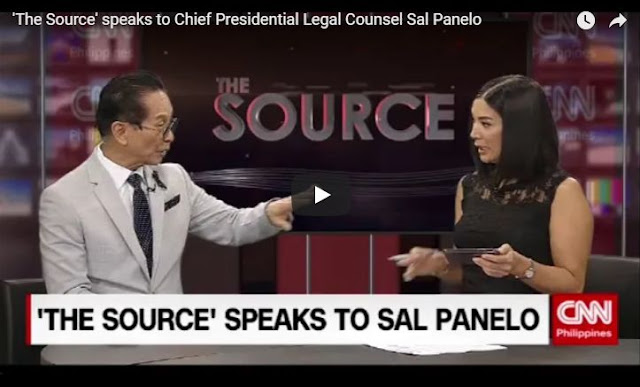 Chief Presidential Legal Adviser was the guest of "The Source" on CNN Philippines hosted by veteran journalist Pinky Webb.

During the said discussion, Pinky Webb asked Atty. Panelo about his reactions on the statement of Pres. Duterte that it was Solicitor General Jose Calida as the person behind the research on the voiding of Sen. Trillanes amnesty to which Panelo confirmed.

Pinky Webb asked Atty. Panelo why he did not conduct the research against Trillanes but Panelo answered that it was not his job. Atty. Sal also noted that it was the SolGen's job to look into the regularities or irregularities, just like what he did to Trillanes.

Atty. Panelo burned down Pinky Webb when she insists on her line of questioning about the possibility of the conflict of interest between SolGen and Sen. Trillanes. Atty. Panelo was quoted as saying "If you will adopt that kind of argument, then all these people, to do is to file cases against the SolGen so they cannot investigate anymore." Atty. Panelo stated.

The veteran lawyer also explained that he did not see any stamp received by any office, based on what he saw. Trillanes should have the duplicate of his Amnesty Application which, there is none. He also clarified the statement released by Congressman Alejano, who likened the amnesty application with his passport which is in anyway not related with each other.

When Pinky Webb insisted that Trillanes had a certification, Atty. Panelo asked by whom the certification came from, because according to the legal counsel of Pres. Duterte, if you look at the documents, there is a letter by the Ad Hoc Committee addressed to Gazmin, that they are recommending the approval of the applicants and in the same letter, Gazmin signed it approved.

Then he wrote a letter to former Pres. Aquino that he approved and granted amnesty to the recommendation Gazmin wrote himself.

Pinky Webb also noted that the DND was tasked with receiving and processing applications-including oppositions thereto, if any-for amnesty pursuant to the proclamation and determining whether the applicants are entitled to amnesty.

Atty. Panelo then clarified that the DND's job is to receive and process and not to decide or to approved the amnesty. It is indeed usurpation of authority allegedly committed by former DND Secretary Voltaire Gazmin. The power to grant amnesty or pardon is exclusively granted to the President only nad not by the DND.