Must Watch: Sen. Enrile Wants to Correct Philippine History About Martial Law and the Dangers of the Communists

Posted by Phil Newsome on September 22, 2018
Veteran lawmaker and one of the leaders of the Marcos Regime implementing the controversial Martial Law in the Philippines, Sen. Juan Ponce Enrile, finally speak up about the real happenings during the Martial Law and even before the Martial Law declaration and the real dangers of the communist movement. 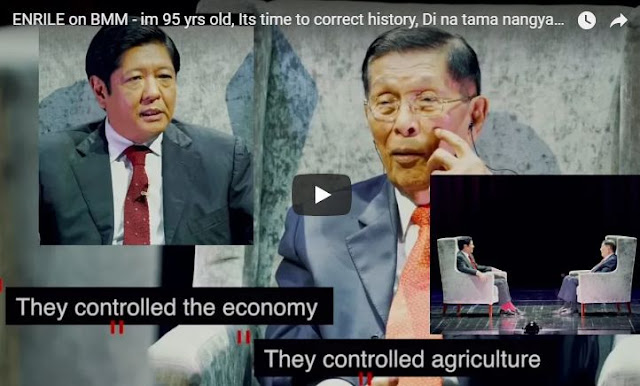 Former Senator Juan Ponce Enrile noted during his exclusive interview with fellow former lawmaker Sen. Bonbong Marcos, he stated that he is already 95 years old and its time for us to correct history. He stated that he could still remember as far as Pres. Aguinaldo up to the present administration of Pres. Rody Duterte.

Sen. Enrile stated that history from the time of the Americans, it was totally distorted to favor one group and little by little the truth will come out as he stated taht he is glad that Marcos invited him to talk about an important topics about Martial Law. The senator also challenged everybody to debate with him if he is saying somthing wrong about Philippine history.


According to the senator one of the biggest fallacy of the hisotorians about Martial Law is the accusations that there were 70,000 arrested or killed during the Martial Law years but he is willing to debate anybody if that report were indeed true.

During the early days of the Martial, the Philippines is very peaceful and only the members of the Communists or lawbreakers were arrested. There is no one person that was arrested because of religious or political views against the Marcos administration.

All of the accounts about the success of the Martial Law were never heard because the historians distorted our history which favored the oligarchs and only some families. There was no massacre during the Martial Law years unlike the first years of the Aquino administration wherein the Mendiola Massacre happened.

Nation Building covers infrastructure, agriculture, energy and education. That's why when Marcos started with Agriculture the government established irrigation canals in many parts of the country. Then he went into electrication, the national electrification started with Marcos, who started the Geothermal sources of energy in the country today which is helping the economy.

Later on, Pres. Marcos focused on education so he founded many State Colleges and Universities nationwide. He introduced Land Reform, that's why he was very conscious of the sale of Hacienda Luisita during the Garcia administration, because it was part of his land reform program.

Pres. Marcos also proposed the establishment of the nuclear plant which was derailed by Cory Aquino because of her anger and revenge of the Marcos administration.

Sen. Enrile also revealed during the interview that it was not only the Communist problems that needs to be solved unless Martial Law was declared, there were other problems such as the powerful oligarchs who controls the media, drug menace, powerful land owners, warlordisms and the connivance between oppositions and the communists.