Posted by Phil Newsome on September 19, 2018
The tough-talking President of the Philippines, President Rodrigo Roa Duterte burned down the former COA Commissioner Heidi Mendoza as he noted that Mendoza can't lecure him because he is ahead of COA during the time when the President was still a prosecutor or Tanod Bayan even before the Ombudsman's office existed. 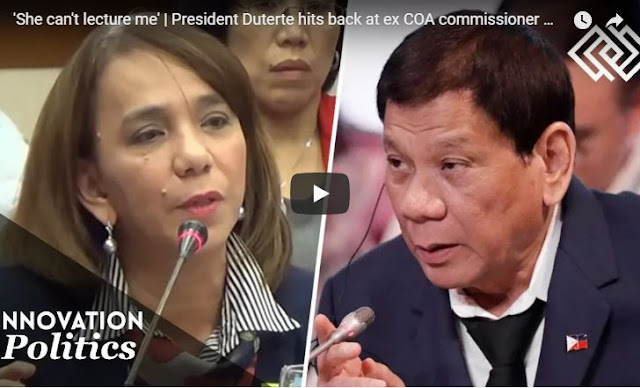 Pres. Duterte slammed the former Commissioner as he defended his earlier criticisms against state auditors. The statement of Pres. Duterte against Mendoza not to lecture him came out after the former COA official said that the agency deserves some respect.

The President made headlines earlier when he stated during a press briefing in Ilocos Norte that COA auditor in the province should be pushed off the stairs for not allowing the release of some emergency funds due to a COA circular as revealed by Ilocos Norte Governor Imee Marcos.

During a speech in Malacañang Wednesday evening, Duterte said that Mendoza can’t lecture him as he is way ahead of her.

“Si Heidi sumagot siya (Heidi answered). I’d like to tell her: You know, when I was a prosecutor, fiscal ng (of) Davao, city fiscal, assistant city fiscal. I was at the same time a special Tanodbayan prosecutor,” he said.

According to Duterte, he was only speaking for those local government officials who can’t complain against the COA during the onslaught of Typhoon Ompong over the weekend.

“I was speaking of the people who cannot defend themselves properly. I was not criticizing,” he said.

“‘Yung doon sa Benguet, sabi nitong ano (Like there in Benguet, they can’t) — because they have to comply with certain regulations. Sabi ko (I told them), ‘To hell with COA. Do not listen to them just do what I’m telling you to do. I will answer them,'” he added.

“Just like the military. You just do your duty. ‘Pag nasabit kayo (If you get in trouble), I will answer for it. Do not bother to worry about anything,” he continued.