Posted by Phil Newsome on September 20, 2018
An alleged payment of P5,000 per head for the September 21, 2018 Rally against the administration of Pres. Rody Duterte is now spreading like wildfire on social media but there is still no confirmation yet whether the message really exist or just an edited image of Facebook conversation. 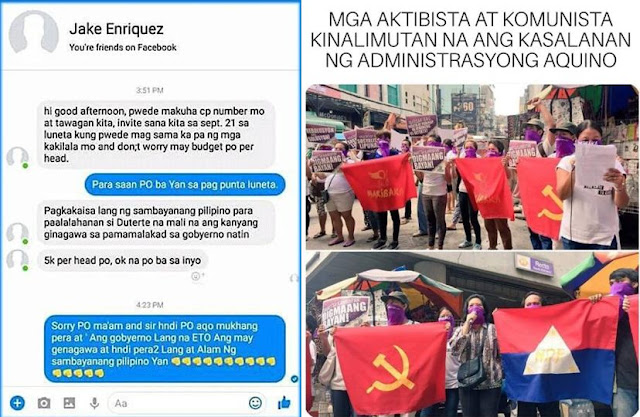 According to the post shared by a certain Jake Enriquez, an unknown individual invited him if he/she can get the cellphone number of Enriquez as he will be invited for the September 21 Rally to be held at the Luneta.

The alleged member of the protesting groups also noted that Jake Enriquez could also bring with him his friends and he should not be worried because there's an intended budget per head and when asked about the purpose it is for the ouster of the President.

According to the person who made the invitation, there will be an alloted P5,000 per head for those who are willing to attend the said event which they dubbed as a rally to remind Pres. Duterte that what he was doing is contrary to the will of the Filipino people.

Netizens reacted with the said controversial post about the P5,000 budget per head for those who are willing to attend teh protest rally on September 21 to oust Pres. Duterte.

Here's Some of the Most Controversial Comments Posted on Social Media: 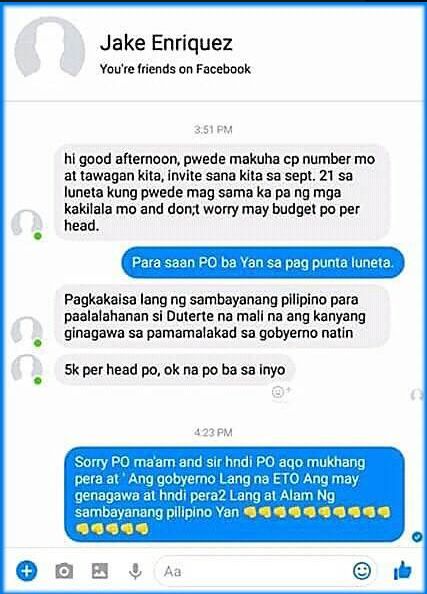