Posted by Phil Newsome on July 27, 2018
The Court of Appeals has dismissed a petition for review filed by the controversial news media outlet Rappler, in particular Rappler Inc. and Rappler Holdings Inc. against the Securities and Exchange Commission (SEC) ruling that revoked their certificate of incorporation over alleged allegations of being controlled by a foreign entity. 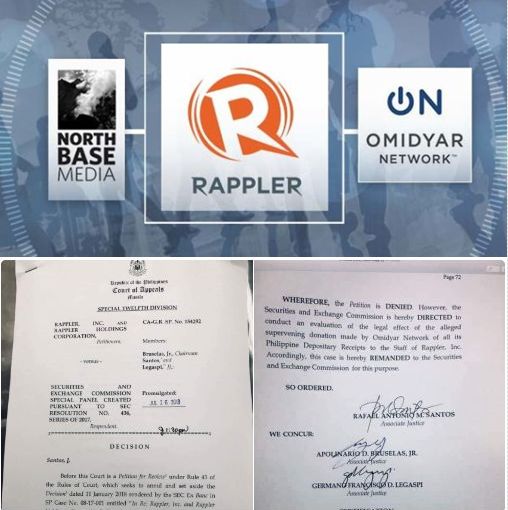 The decision of the appellate court is a welcome development according to some supporters of Pres. Rody Duterte who became the primary target of the alleged biased news site Rappler. The CA remanded the case back to the SEC for evaluation, particularly the impact of investment firm Omidyar Network donating its Philippine Depository Receipts (PDR) to Rappler's Staff.

The Court of Appeals directed SEC to "hereby conduct an evaluation on the legal effect of the alleged supervening donation made by Omidyar Network of all its Philippine Depository Receipts to the staff of Rappler Inc."

Based upon the initial decision of SEC, they said that Rappler violated the Constitution of the Philippines and various laws by allowing Omidyar Network, one of the holders of PDRs issued by Rappler to exercise control over its corporate affairs as provided for in their internal agreement, in exchange for a fund infusion of $1 million.

Rappler, one of the most vocal news critics of the Duterte administration and often accused by Duterte supporters as one of the biased network, maintained that Omidyar did not exercise control over the news site and that there was no declaration made by the SEC on this matter.

The Court of Appeals decision to dismiss Rappler's appeal  is recognized as a "new development" not factored by the SEC when it sanctioned the nascent media organization for violating constitutional restrictions against foreign ownership of mass media companies.