Posted by Phil Newsome on April 16, 2018
Veteran journalist and one of Vera Files most prominent leader, Ellen Tordesillas made headlines on social media after her controversial explanations during an ANC Live interview about the roles of Vera Files in fact-checking on Facebook. 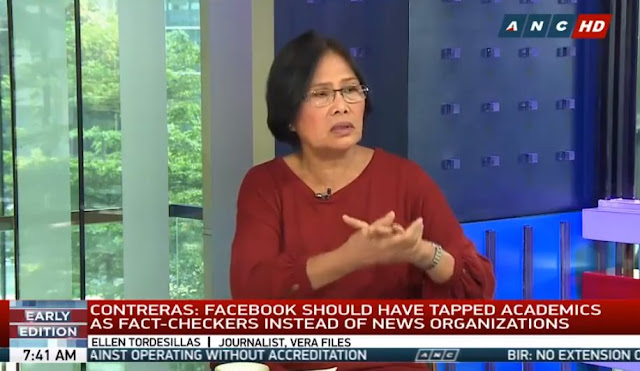 Netizens took to social media particularly on the official Facebook Page of ANC Philippines after Ellen Tordesillas failed to convince most netizens on how they were able to fact-check every suspected websites who were allegedly purveyors of fake news in the Philippines.

According to Ellen Tordesillas "Wala kasing definition yan, falsehood, kami kasi... in fact falsehood, what we, what we track are falsehood that appears on website that being shared in Facebook, yan yung nasa Facebook contract namin.

The ANC host also asked Tordesillas if they can check the post of the veteran La Salle Professor Antonio Contreras but the Vera Files could not explain clearly her answer to the questions presented by the TV host.

Netizens reacted and some of them even slammed Tordesillas for her failure to explain her side on why they were chosen as the fact-checkers of FB in the Philippines and on how they will conduct their fact-checking activities without biases against the supporters of Pres. Rody Duterte.

Here's Some of the Most Popular Comments Against Tordesillas:

Llen Ikamu: That's our fact checker , doesn't even know what is fake news. Remember Galileo, he was faked news by the Catholic church and it turns out that the earth is not flat.

Lelith Ubay-ubay: OMG... how the hell did she become a fact checker? She can’t even explain well what she’s supposed to be checking? It’s so obvious how low her analytical level is that she can’t even convert it to simple words! Good luck to the kind of ‘FACTS’ she’ll ever produce.