Posted by Phil Newsome on April 01, 2018
A certain Barangay Captain is now making the rounds online after he was lauded by netizens for his Duterte-like style of leadership as he was caught on camera stopping abusive residents from charging toll fees to all visiting tourists and motorists in the said Barangay. 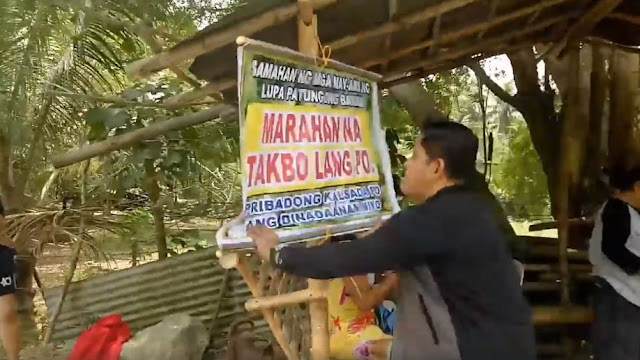 Based upon the viral video posted by concerned netizen Hilario Caperlac, it showed how the Duterte-style leadership of a Barangay Captain who stopped the abusive gestures of some who charged motorists and tourists for a toll fee before they can enter in one of the Barangay's tourist spot.

Watch the Controversial Video of the Duterte-Like Barangay Captain:


As shown on the video, the Barangay Captain attacked one of those manning the toll gate who charged motorists a certain amount of money before they can enter the said Barangay Road.

The Barangay Captain took the rope used as a toll gate and dismantled all the tarpaulins which announced the conditions of charging motorists before they can enter the said route.

The furious Barangay Captain with the help of his Barangay Tanods then ordered all the motorists to pass by the road without any charged and he even have some strong words against the organizers of the toll gate.

Netizens also lauded the leadership and political will of the Barangay Captain who immediately made some actions with the numerous complaints received by some residents in the area.

Based upon the comments from netizens, the Barangay Captain in the viral video with more than 3 million views is no other than Brgy. Captain Abner Palad of Barangay Matictic, Norzagaray, Bulacan.

Here's Some of the Positive Comments from Netizens: