Posted by Phil Newsome on April 09, 2018
Chief Justice Maria Lourdes Sereno got a dose of her own medicine after President Rody Duterte decided to engaged the Chief Justice in a "Word War" and even wants her to be removed from the Supreme Court. 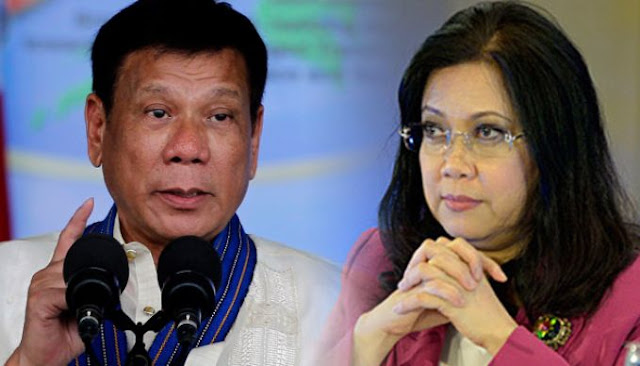 Pres. Duterte launched a profanity-laced tirade against the Chief Justice after CJ Sereno keeps on accusing the President as one of those behind her ouster and the impeachment proceedings.

Irked by CJ Sereno's insistence that Pres. Duterte might have a hand in the moves to oust her from the Supreme Court, Pres. Duterte said he would make sure that the Chief Magistrated would be impeached.

Pres. Duterte was quoted as saying "I already told Chief Justice Sereno, I am not into the habit to go after my enemy. I have no history on that," Pres. Duterte said during an interview with reporters in Davao City before flying to China to participate in the Boao Forum Asia on Tuesday, April 10, 2018.

The 73-year-old President added further that "I am telling you that I never interfered (in the impeachment trial against you). Now, you keep on blabbering. I will punch you. I will help any investigator. I will really punch you. So I'm putting you on notice that I am now your enemy and you have to be out of the Supreme Court," he added.

Pres. Duterte's statement against CJ Sereno came out as part of the President's response on the Chief Justice remark earlier Monday.

CJ Sereno said in a speech during the Araw ng Kagitingan event organized by the Movement Against Tyranny, as she hinted that Pres. Duterte might be behind the petition filed by the Office of the Solicitor General which questioned the legitimacy of her appointment as Chief Justice.