Must Watch: Erwin Tulfo Lambasts Sen. Kiko Pangilinan for Complaining Against the Closure of Boracay (Video)

Posted by Phil Newsome on April 09, 2018
Veteran broadcast journalist Erwin Tulfo lambasts Sen. Kiko Pangilinan for complaining against the immediate closure of Boracay Island as he explained the main reasons why Pres. Rody Duterte decided to start the closure this coming April 26, 2018. 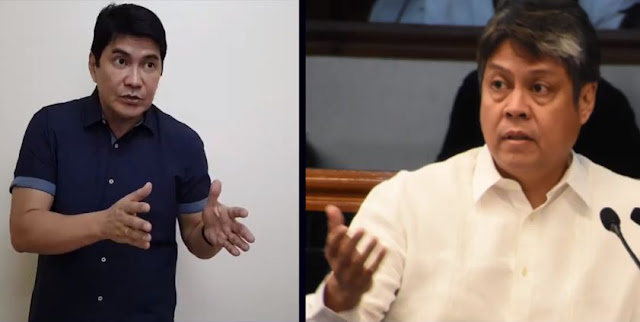 According to Erwin Tulfo, one of the reason why the day April 26 was chosen is because of the fact that the island will start their popular "Le Boracay Festival" on April 27, 2018.

During the said "Le Boracay Festival" there were reports that various illegal activities proliferated in the island and in order to prevent the same incident to happen, the President decided to start the closure of Boracay on April 26, which is contrary to the suggested date of closure by some senators and other lawmakers including Sen. Kiko Pangilinan. The said festival also causes the huge amount of garbage being generated during the festival.

Aside from the Le Boracay Festival reasons, why the April 26 date was chosen, Pres. Rody Duterte also realized that the rehabilitation should start as earliy as April and not during the rainy season because the establishments will have an ample time for repair and rehabilitation.

Erwin Tulfo also noted Sen. Kiko Pangilinan should used his brains on his decision to urge the government to postpone the closure of Boracay this summer and instead implement the order during the rainy season. It is indeed harded to rehabilitate the island during the rainy season. Sen. Kiko Pangilinan should used his common sense according to the veteran journalist, Erwin Tulfo.

The journalist also revealed that he received reports that one of the reason why Sen. Pangilinan wanted to postpone the closure of Boracay was due to the fact he was supposed to attend a beach wedding in Boracay wherein he is one of the godfather. Erwin Tulfo also reminded Sen. Kiko Pangilinan on his controversial Juvenile Justice System Law which is allegedly behind the proliferation of criminal cases against the youths.