Posted by Phil Newsome on April 10, 2018
Pres. Rody Duterte burned down another Inquirer reporter during a press conference before his departure for an official visit to China. Inquirer reporter got a dose of his own medicine after he insist the President to answer his question immediately. 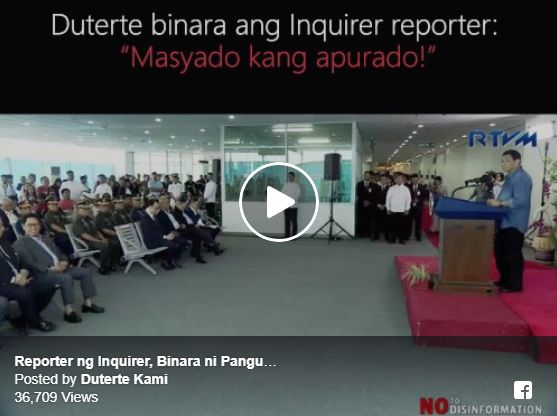 The Inquirer reporter was identified as Allan Nawal, one of the veteran journalist based in Davao City.

Watch How Pres. Duterte Burned Down the Inquirer Reporter:

Allan Nawal asked the President that "when he came to power, you said that, you will choose only the brightest and the best," but before he could finished his question, Pres. Duterte immediately interrupted by saying that "No I did not come to power, I just assume the employment as a worker of the government, I do not have any power actually" Pres. Duterte said.

The Inquirer reporter continued his questions to the President by asking again that the President would only chose the best and the brightest in the Cabinet but it seems that, they're also fast going out of the Duterte Cabinet.

Pres. Duterte answered simply by saying "There are standard to follow, if you fall short of the standard, I'm sorry." "We may be friends, you might be supporters of mine, but there are rules to be followed and bounderies to honor." "Sabi ko d'yan, the interest of the people, wala na tayong pag-usapan. Basta Bayan ko ang nakataya, wala tayong pinag-usapan. And I do not allow corruption, to trip in at least, during my term. Kung and'yan ka, Sorry." Pres. Duterte said.