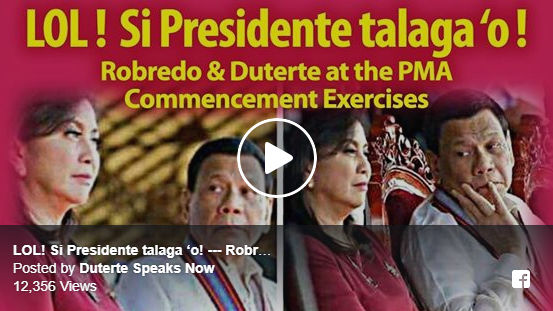 The President also made his usual jokes during his graduation speech in the PMA Commencement Exercise held last March 18, 2018 at Fort General Gregorio H. Del Pilar in Baguio City.

Watch the Speech of Pres. Duterte During the PMA 2018 Commencement Exercise:

Pres. Rody Duterte emphasized during his commencement speech stated that he will just read the third page of his speech and even suggested that next time if the program will exceed two hours, it's better to have an intermission after one hour and he will bring the singers for the intermission.

The President stated that he is as proud to be with the PMA graduates in a very special occassion. He wanted that before he will get out of the presidency he could uplift behind a strong Armed Forces and PNP simply because the troubles we are facing will not simply disappear in the next four to seven years.

President reiterated during his speech that he will never allowed anybody, be it the military, police, armed forces those neo-libertarians, just do your duty in accordance with the law and the President will take care of the rest.